Following on from Google’s celebration for Jim Henson via their Sesame Street homepage doodle, the search giant has cause for celebration once more and it is arguably more significant in terms of Google’s own importance, it’s their 13th birthday!

You probably didn’t realise it, but today, September 27 is actually Google’s 13th birthday, meaning that the search giant is officially a teenager in their life span and to mark the occasion, another homepage design has been revealed on the homepage.

You may not see it yet depending on your location, but we can tell you that Google has kept things very simple indeed, with an old-style colorful logo and a birthday cake left to impress, and not any fancy animation that Google has often used in the past to celebrate other important occasions. Take a look at the design below if you are yet to see it. 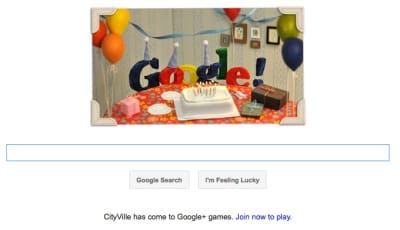 Out of interest, below the logo you’ll see that Google has added a link to remind users that CityVille is the latest game to join their new games service as part of their social networking venture Google+, a direct rival with Facebook. We’ve asked you in the past which website is your favorite from the two and it seems as if many of you prefer Google+ with it’s more mature approach to social networking and the whole ease of adding friends via Circles – a feature which Facebook are now trying to emulate with their new subscriber button.

Back to today’s doodle though – what do you think of it? You may think that it is a bit of a boring design, and we admit it’s very interesting that Google has taken the low-key approach here, rather than go all out guns blazing with a fantastic animated logo. Are you digging today’s design, or do you think it is one of Google’s worse doodles to date?