Google’s dominance of the web has taken an extra step forward with their very own web store. Google Chrome Web Store will play a huge part in pairing up with the release of Google Chrome OS later this year, and be direct competition for Apple’s own app store.

This is the latest pie that Google currently have their fingers in, with others being in the social network sector with the rumored ‘GoogleMe,’ alongside Google TV, and Google OS.

1up, a video game website attended a Google Chrome Web Store presentation and was apple to snap some images that showed off the marketplace for HTML5 apps and games. 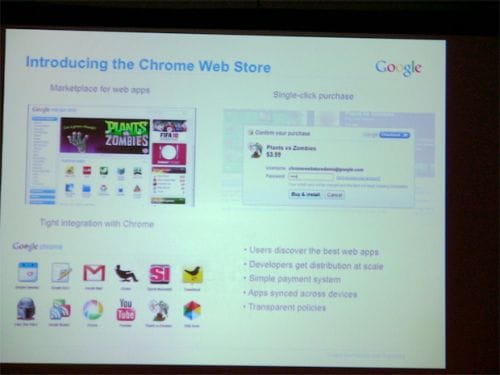 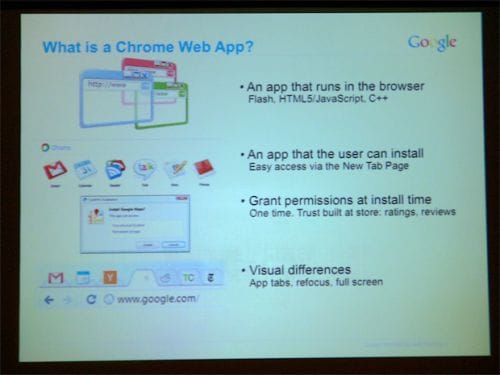 During the presentation, they revealed a few new details about the web store. App icons, categories, top rated games, and a “Apps your friends like” section seemed to be the name of the game, with the latter looking particularly impressive. But how would it know who your friends are? Google Buzz? Google Me?

Google also have one over on Apple when it comes to developers and apps. Apple currently take a 30% cut of revenues generated, but Google say that they only aim to take a 5% processing fee, or there abouts.

The Google Chrome Web Store is scheduled to be unveiled sometime this October, and will play a huge part in competing with Microsoft Internet Explorer with the Chrome web browser and also Windows 7 with Chrome OS.

Check out the video we have also embedded below where Google discuss the possibilities with the web app store, and the potential for HTML games.

Do you think that the Chrome Web Store will be a success?