Earlier on today we brought you a preview of the new Google CR-48 netbook, and although we only briefly mentioned it, Google intend to destroy the caps lock key once and for all.

This is a bold change by Google. Some might say they are trying to police the way people use their keyboards. But Google have stated that the caps lock key isn’t entirely going away, as the newly adopted “Search” button can still be toggled to act as a CAPITAL LETTER FUNCTION. 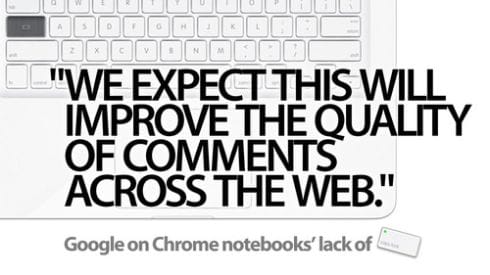 If you hold the proper use of English in high regard, everyone knows that a CONSTANT USE OF CAPITAL LETTERS CAN BE VERY, VERY ANNOYING. That being said, over use of the under-case letter can be equally as bad. for instance at the start of sentences or without proper use of any full stops commas explanation marks or question marks what so ever and obviously the fact of over using the latter two aswell!!!!!!!! So what to do??????

Regardless of what Google do, it won’t stop people from raising their voices in cybercaps tones as we still have the handy shift key at our disposal. Maybe software implementation of auto-correcting could be put in place? Either that or we have a serious look at our education programs.

WHAT DO YOU MAKE OF THIS BOLD MOVE BY GOOGLE??? Sorry, was just trying to emphasise. I wasn’t yelling at you, honest.