The latest social network, Google+ and also known as Google Plus, has been embraced by those that love Google, and even Facebook users that just want to try something new. Some people still have problems being able to join Google’s best answer to Facebook, the system is invite only with the daily limits being reached from time-to-time thanks to demand for an invite. We’ve heard from some PR readers that wanted an invite, and when they got one and tried to join, a message of “over capacity” has been shown. Have you had this problem?

PR’s Jamie Pert posted a few tips and tricks for Google+ just two days ago, which you can read about here. These simple tips will help Google+ users do simple tasks, from shortcuts and hotkeys to styling the font mark-up. The article points to many improvements over Facebook, but also highlights improvements needed like an official vanity URL for Google Plus rather than 3rd party custom URL solutions, which are no replacement for what Google should offer.

Today we’ve found a really nice graphic, a Google+ cheat sheet, which shows the most common shortcuts, hotkeys, and syntax. Most of these you might already know, but we did learn a trick or two from the picture you can see below. Those of you that want the Google+ cheat sheet in more languages can see around a dozen graphics in Simon Lauststen’s post here, which just happens to be on Google+ as well. 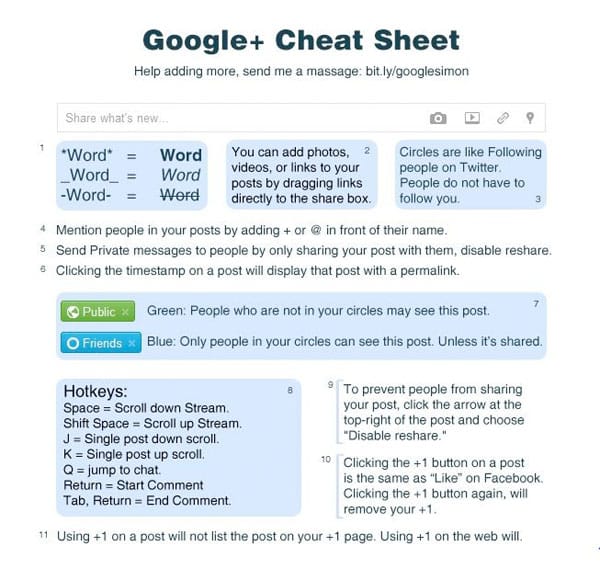 In some related news, just a few hours ago we posted details of a new Facebook scam that was targeting the need for Google Plus invites, these scammers are trying to cheat people by using a Facebook app. Have a read here, and let us know if you’ve been caught in any of these Facebook scams?

Have you started using Google+ yet? If not feel free to contact us for an invite (daniel AT product-reviews.net). What do you think Mark Zuckerberg’s answer will be to Google Plus? How would you like to see Facebook improved?

Let us know if there is anything missing from the cheat sheet, and if so please share what you want to know in the comments below.