Today we can confirm that a new version of Google + for Android has been rolled out, this brings the app to version 1.0.2 and despite the fact that app is still relatively new and was already pretty impressive the new app is even better.

Installing the new app is pretty simple, either head over to Google.com/mobile/+/or if you had Google + already installed on your Android device you can simply check the Android Market and see if any updates are available for your apps, you should see an update available for Google +, this is just a few MB in size so it shouldn’t take too long to install. We installed the update on the HTC Sensation and the whole procedure took just 17 seconds.

Once installed you will be glad to hear that performance improvements and bug fixes have been made to many aspects of the app, also you will now be able to browse images from the photos section of the app. Additionally the update also fixes minor problems affecting users who use Swype and one neat improvement allows you to customize the main stream view. There are also a whole bunch of improvements which have been made to the Huddle feature.

We briefly tested out some of the most noticeable improvements / changes, we were pretty impressed by the way that you could set any image you come across as your smartphone’s wallpaper, whether you are accessing it from the stream or via the app’s Photos feature. Simply touch the image to see it full size and you will see a button in the top right corner which looks like 3 dots, touch this and you will see an option to set the image as wallpaper, it works really well. You can see an example of this below. 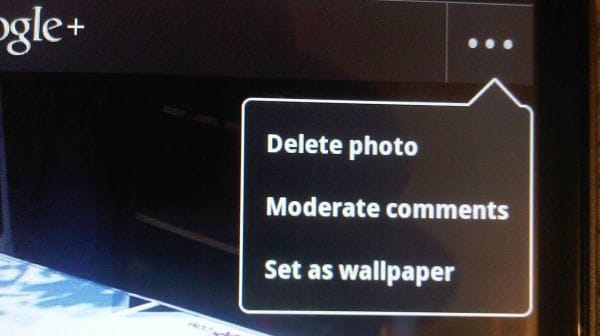 When you are viewing the main stream you can now click on the menu button (which all Android smartphones have) and then select ‘Manage views’, this will allow you to select which circles you want to show up in the stream.

In terms of Huddle it is one aspect of the app which we haven’t used a great deal, however we did test it out a little for you guys. Once the update is installed it allows you to select multiple people to add to a huddle at once, if you want you can invite entire circles. Another neat improvement is a simple setting which is available via the app’s menu when you are using Huddle, this allows you to choose who is able to invite you to a Huddle, the three options are: Anyone, Your Circles and Extended Circles (see below). 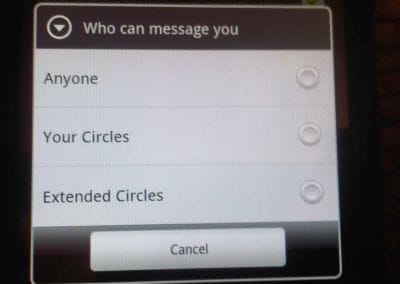 We think that the changes are great, however we really would like to see the Google + app allow you to join a Hangout when using your Android smartphone / tablet, how about you?