During 2010 it was plain to see that Google Android‘s popularity had grown hugely, in November 2010 we posted an article which spoke about the astonishing sales Android smartphones had seen, now we can confirm that during Q4 2010 Android overtook Symbian as the world’s best selling smartphone platform.

According to figures from Canalys during Q4 2010 33.3 million Android handsets were shipped, this gave Google’s OS a 32.9% share of the Q4 2010 market, their closest competitor was Symbian which topped this chart last year. 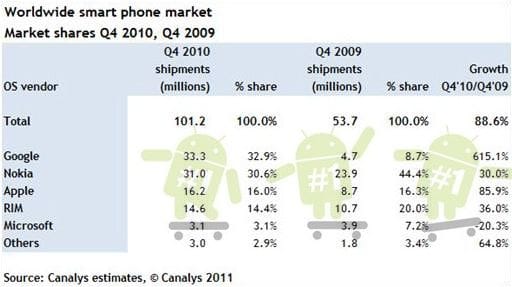 The above image comes courtesy of Canalys and shows the different sales figures that mobile OS’ saw in Q4 2010, in my opinion it is most shocking to see that RIM’s share of the market during these quarters dropped from 36.0% in Q4 2009 to just 14.4% in Q4 2010, I think this shows that more BlackBerry smartphones need to be released in 2011 for RIM to stay competitive.

If you check out this recent Engadget post you can see the full press release which goes into detail about all of the major mobie operating systems out there, do you think Google’s dominance will grow in 2011?