The gold Nokia Oro has just been announced, and before you start thinking how come we never knew about this new handset, it’s just a C7. Ok, we know that the outside looks different with its gold and leather finish, but it still has the same hardware as the C7. It is nice to see that Nokia has given this handset a little makeover, but Symbian lets it down.

All the usual suspects are still there, the 3.5-inch screen, pentaband radio and also that 8-megapixel camera. So apart from the OS what is the other downside to the Nokia Ora? That would be the price? OK, so we know that it is covered with 18ct gold, but still not sure it is worth â‚¬800 ($1,126).

There is no sign that the Oro will make it to the US, as it is only expected to be released in Asia and Europe in Q3, 2011. However, if it does well then maybe Nokia might reconsider this. Nokia has said that the reason behind the Ora is due to the fact that many people have been looking for more premium products. 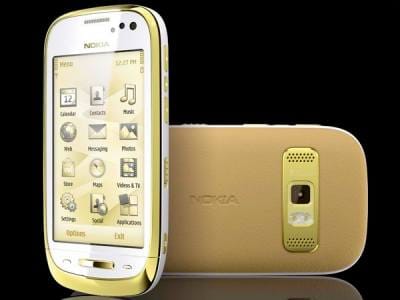 Over the years Nokia handsets have been left behind the likes of Android and the iPhone, so we did not expect much from the C7, but we were surprised at just how good the phone was; this is thanks to its high build quality. We wonder if Nokia will start to do this with some of their other handsets? For full details visit Nokia.

Would you buy the Nokia Oro, which is basically a pimped C7?