Become a soccer legend and play in real time with Goal Battle, the 3D soccer game for the iPhone, iPad and iPod Touch.

Goal Battle by Mobicle Co.,Ltd. is a great three dimensional soccer game that you won’t be able to put down. Re-create that tense moment you see in world cup and play with others to become the ultimate player.
Goal Battle 3D has a brilliant feature that allows you to compete against an opponent “Live” watching other participants as they play in “Real Time.”

Battle against friends at the same time and compare your ranking with others on the leader boards. Single mode allows you to get your practice on your own. To start you just tap Gameplay and you easily get to kick off straight away.

Create and customize your player to your favorite character and play with the team you support. There are up to 84 different kits to choose, including various power boosting items and equipment. 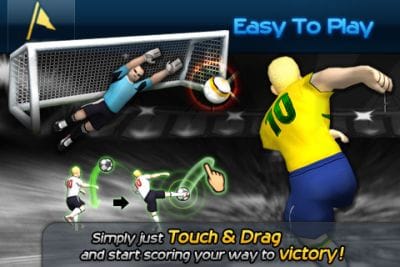 Show of your skill as a soccer superstar with Goal Battle 3D and challenge others. For more information, visit the App Store.