Climate change and the factors behind it are more involved than some people would believe, simply pointing to different environmental problems and saying they affect climate change will not cut it. In the news this week are concerns over “Global Cooling”, and the facts that sunspot numbers may decrease will not lead to what some expect as a small ice age.

We may see solar activity drop for a number of decades but the idea that this will cause our global warming problems to go away are almost laughable. Wired.com has taken a look at just this issue and what might be the result from a sunspot drop.

If you’re keen to follow climate change, the number of sunspots, and enjoy watching solar flares in near real-time, then we wanted to point our readers in the direction of a few apps that run on Apple iOS devices.

One app called “Our Climate” explains what the common myths are, looks at the science of climate, key climate change issues, and features in-depth guides. The app costs under a dollar and can be found on iTunes with full details. 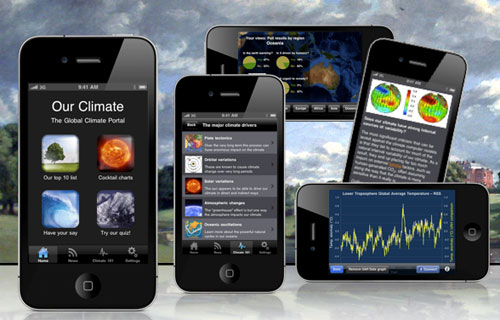 Those of you that like to look at the affects on Earth’s environment from space will enjoy an app titled “Solar Monitor”. Current space weather can be tracked via solar images, plots, with around 20 different charts, and other data that’s updated around the clock. The Solar Monitor app works on iPad, iPhone, and iPod touch for $1.99.

The most simplistic app we found related to climate change is possibility the most related to climate cooling, and it’s called “Sunspot”. Not only is it free via iTunes, but also you will get NOAA sunspot data, WWV space weather, and includes trending from previous and current data sets.

Feel free to share your feedback on the above apps in the comments, and let us know what you think about global cooling.