Well, it is that time again because not only does the Goodwood Festival of Speed start today, but so does the Glastonbury Festival 2015, two of the biggest events for music and car lovers in the UK. People have already been camped at Glastonbury for days to make certain they get a good pitch, although we know that thousands of other people had the same idea.

There are so many things that festival lovers will want with them over the next few days, although there are just two apps that are imperative, and those are for the Glastonbury Festival 2015, map and weather, along with that all-important schedule as well.

Let’s talk about the Glastonbury Festival map for 2015 first shall we. You can find this on the official website (Here), which tells you where the stages are, although just as important, the key facilities and services. 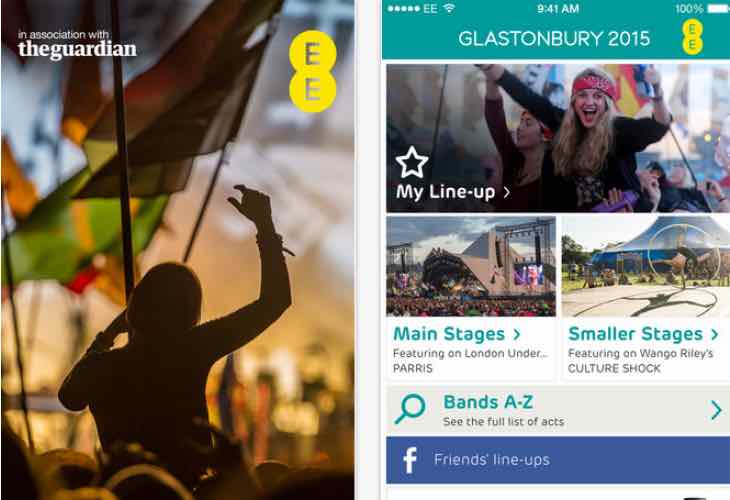 Next is the Glastonbury Festival 2015 schedule and lineup, and the best way to see this is by downloading the official EE app. This has been updated this month for both Android and iOS devices so that it now includes the 2015 line up, has a new pin location tool, which you can share so that you will be able to find other people you went with, and also improved social functionality.

This app also has an interactive map, so when you zoom in and press on a certain location it will tell you what time the next band/artist is playing. Going back to that pin feature, all you need to do is keep your finger on the map and then a dropdown box will appear at the top, which then asks for you to give your pin a name, which you can then save and share.

Last year we saw a Glastonbury Festival Google Earth map made, although the person that created it has not done one so far for 2015, although most things are still in the same location, so you can still give it a try.

One thing that is missing from official event app is the weather, and so you will have to rely on one you already have. If you are looking to get the most accurate Glastonbury Festival 2015 weather information, then I would advise going for the Met Office, as this has not let me down yet.

There you have it, we hope this information comes in handy for you over the next few days.