One game which a lot of people have seemingly been waiting forever for is Ghost Recon Future Soldier, since we first heard of its existence we have seen some sneak peaks of gameplay footage, however today we have a 4 minute multiplayer video for you all to feast your eyes on, we don’t think you will be disappointed.

The video has been embedded at the end of this post, after watching it your are reminded why you have longed for this game for so long, we especially like the team emphasis which Ubisoft seems to have given the game’s multiplayer elements and the way that intel has a high value in the game.

In the video you see footage similar to what was playable at E3 2011, when playing multiplayer modes you will either play as the one of two factions, the ghosts and the bodark, within the factions there are three roles to choose from, these are rifleman, scout and engineer. Riflemen are kitted out with assault riles and light machine guns which make them ideal for front line combat. Scouts tend to hold back and use sniper files and sub machine guns to take enemies out from a distance, finally engineers allow you to take out the enemy with either shotguns or personal defence riles, however engineers are mainly going to be used for their equipment such as drones which can be used for gathering intel. You can see an example of the character loadout screen below. 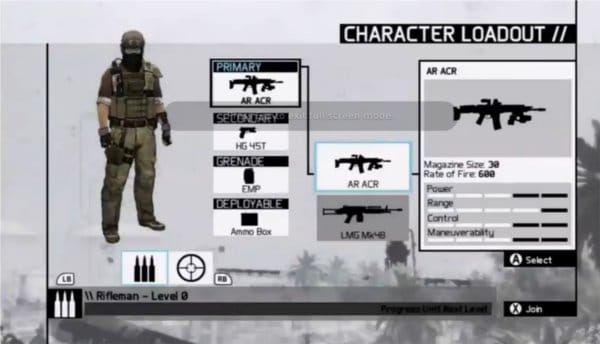 The game mode showed in the video is called ‘Conflict’, this is said to be an objective-based team deathmatch, here you get to see the game’s great cover system which seems to have been dubbed “Cover Swapping”, also when you are being suppressed by enemy fire the camera shakes and it is hard to focus, which proves just how important covering fire will be in the game, you can use smoke grenades etc to combat covering fire – which in our opinion should make game modes very tactical indeed.

A few other things which we must mention include the following: you can hack or be hacked by an enemy (if you stun an enemy then hack them you can gain intel to share with your team) this means for a limited time you can see whereabouts on the map your enemy is – this means that hacking enemies is going to play a massive part in muiltplayer game modes. As previously mentioned engineers have access to a drone, this allows gamers to fly the drone wherever they want to and see the locations of the enemy, it looks like this intel can be shared on your HUD via augmented reality to easily find the enemy (see below) – neat eh?

As you can see a lot of the above circles around intel and teamwork, but we must quickly mention something else we saw in the video – when reaching objectives on the map you must interact with certain objects, however unless you have teammates with you this will take a long time, this should ensure that successful squads work closely together and talk a lot via their headsets, we think that this will be welcomed by many of gamers who are frustrated by the run and gun mentality which we see from lots of today’s top shooters.

Those of you who were wondering about graphics will not be put off by this video, we were impressed by the seemingly large maps which seem well thought out, not only this but lighting / shadowing looked great as well. Despite the game not being finished it looks pretty smooth to us, however we still have to wait over 6 months to buy this game – has the video embedded below convinced you to wait?