Now that we have entered August it means that Madden NFL 12 is less than one month from its release date, which is planned for August 30 on the Xbox 360, PS3, PSP, Wii, 3DS and older PS2. The American football game will be published by EA Sports and EA Tiburon are the developers, but there is more to be excited about if you’re a member of EA Sports Season Ticket.

Madden NFL 12 will be the first game under the season ticket, which means access three days before the official release date. This is perfect for die-hard NFL fans but comes with a cost, and that’s $24.99 for PS3 and Xbox 360 owners. You’ll get many more perks with the season ticket, which launches today. These include the ability to play other EA Sports games early like FIFA, NCAA Football, and Tiger Woods, plus a 20% discount on EA Sports POLC, premium web content, and an exclusive badge.

Three days after you access the Madden NFL 12 download you’ll get to keep all achievements by moving them to your full retail copy. You can watch a video here that details all you need to know about EA Sports Season Pass, including frequently asked questions and how to buy the new service.

Some highlights from the new gameplay in Madden NFL 12 include a custom playbooks feature; AI enhancements, a new collision system and awareness for concussions, distinct throwing motions from quarterbacks, and opening presentations have been enhanced with cheerleaders and mascots for selected teams.

While Electronic Arts see the “season ticket” as a good deal for the gamer, how good it really turns out to be is yet to be seen. The user has to part with money upfront in the hope that these perks end up being worthwhile, and the main one seems to be early access to the full game. You may want to read about the online communities feature in Madden NFL 12.

Do you like the idea of playing full EA games before their official release date? 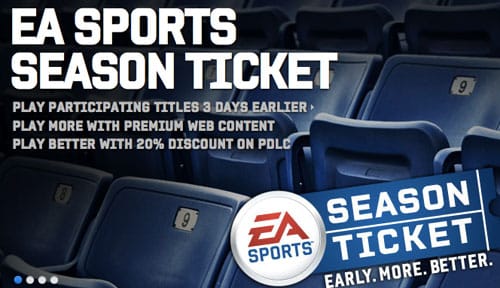