Wijnaldum is the new hero of Newcastle United after their 6-2 win over Norwich City in the Barclay’s Premier League. EA may now decide to make Wijnaldum a hero of their own with a special card in time for FIFA 16 TOTW 6.

The dutch player scored four goals and that will mean that he will definitely be included in EA’s new TOTW lineup next week. However, the debate is now on via social media on whether he gets a special in-form card or a purple Wijnaldum Hero card on FIFA 16.

To recap, the hero cards that have been handed out so far include one to Lewandowski for scoring 5 goals in 9 minutes, Aguero for scoring five goals in a match, Ronaldo for breaking Real Madrid’s all-time record and likewise for Ibrahimovic with PSG. 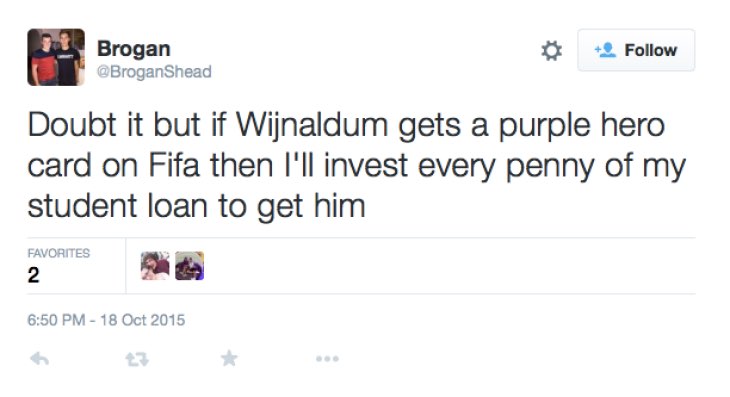 Now, we can see that fans want to see another hero card for Wijnaldum scoring four however we have a feeling that EA will just hand out a standard in-form card instead.

Regardless of what happens, we can already see that Wijnaldum’s value on FIFA 16 has skyrocketed on the transfer market. If you do have one of these cards now is the time to sell if you want to make a quick profit – you can get around 2,000-3,000 coins for him currently.

What are your thoughts on the TOTW 6 predictions – will Wijnaldum get a hero card or standard inform? Who else should be on the list?