Today we have seen quite a few impressive vehicles revealed at the Geneva Motor Show 2010, the latest car we have seen is the Ford Focus Estate, this is the first global unveiling of the Estate Focus.

The front-end of the Ford Focus Estate is very similar to other Focus models which were unveiled at the Detroit Motor Show in January, apparently this model will be more comfortable, stable and agile then previous models.

These improvements are made possible by torque vectoring, dynamic cornering control and a new electric power-steering system.

As you would expect there are petrol and diesel models available, petrol models include a four-cylinder 1.6-liter engine which delivers 148bhp. There is also a high-performance 2.0-liter model which delivers up to 203bhp.

As for diesel models their should be a 2.0-liter TDCi diesel motor released, apparently there will be “two states of tune”, which means it will deliver either 134bhp or 160bhp. 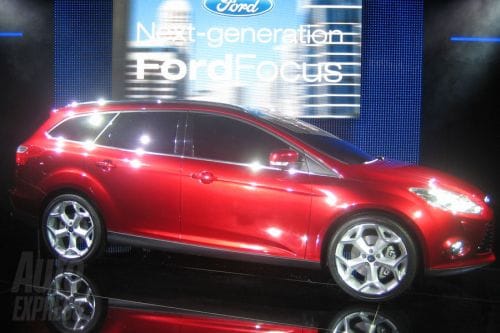