The hotly anticipated third installment to the thrilling Xbox 360 exclusive trilogy from Epic Games, Gears of War 3, is less than a week away from release now, which means a lot of gamers will be debating, if not already decided, whether to get it or not. To help them decide, those who have been lucky enough to experience the game before release are letting us know what they thought, as the reviews begin to roll in.

The third-person shooter series has been entertaining a generation of console gamers for a few years now and this year’s title is promising to be the best yet. VideoGamer begin their review explaining how many other games since the series began have tried to imitate the unique gameplay system. They then introduce Gears of War 3 to the readers with the premise of the game.

The lengthy 10 hour campaign is split over five acts, and is described as being of ‘impeccable quality’ but lacks Epic’s ‘creative level design’. There is a lot of praise for the developer’s engine used to power this game, the Unreal Engine, which they say is responsible for ‘much of the ooh and aah factor.’ While the other two titles from the series lacked color, the third is the most colorful yet, even in the night scenes making it a ‘beautiful game.’

New Locust enemies have evolved into Lambent, as new weapons are also introduced in this third game. While the Lancer is still the main weapon, the Digger and the sawn-off shotgun are additions that will come in handy. The legendary active reload feature also remains as a highlight during a shoot-out. The difficulty of the game will be customizable once more as a new casual mode is introduced, though VideoGamer insists ‘veteran gamers will find the difficulty inert on anything beneath hardcore.’

Co-op mode has also been upgraded and can now cater four up to four players at once and as for the multi-player options, Horde 2.0 is now the upgraded version from the last two games, now allowing 50 waves of enemies to be defeated, with a boss every 10. Then there is the five-vs-five mode which is spread out over 10 maps and 6 versus modes. Overall the website gave the game a very respectable 9/10. Check out the full article for a much more in depth analysis of the game.

Are you a Gears of War fan? Will you be getting the game regardless of the reviews? 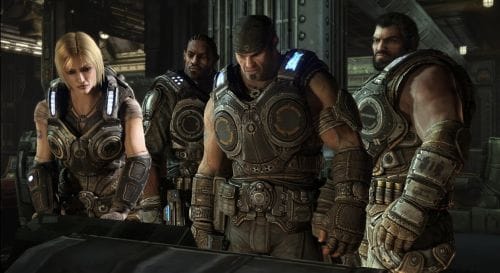