Following on from the official Gears of War 3 release date announcement, Epic Games has also revealed a collection of new weapons which will be featured in the game, as well as all new details for the multiplayer mode.

In case you somehow missed the announcement, the game will be releasing on September 20th. We said in our previous report that we wasn’t sure if that included the UK date, but now we’re pleased to say that September 20th is a worldwide date, with the exception of Japan who gets the game on September 22nd.

With that out of the way, let’s focus on the new weapons which Epic has revealed. Gamers will be able to use new weapons such as The Bayonet Charge, Retro Lancer, a Sawed off Shotgun, The Digger Launcher and an interesting new weapon called the OneShot. The OneShot will be a sniper rifle with the ability to take enemies down with, yep you guessed it – a single bullet! The treat here, is that the OneShot can fire though shields and cover, so theres no easy way to avoid it. We’ve found a picture of the OneShot below for you – it looks pretty tasty doesn’t it? 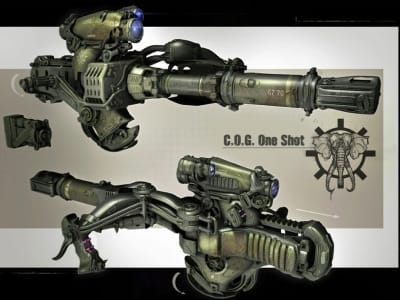 Aside from that, you’ll also get an Incendiary Grenade and upgraded versions of the Classic Lancer and Hammerburst – great news for those of you who loved using those weapons in previous Gears titles.

As for new multiplayer details, you’ll be able to participate in five-on-five battles, as well as take part in a four man co-op campaign – yeah thats the Gears we all know and love! Epic also lifted the lid on a new game mode titled ‘Beast Mode’, which is a spin off on the horde type of game, this time you’re put in charge of the locust team though.

If the new weapons and multiplayer details weren’t enough for you, Epic has also decided to reveal a collection of new maps which will be featured in the game. These include Trenches, Thrashball, Overpass, Checkout and Mercy – hopefully we’ll have full details on these maps to bring you soon.

You can check out the press release over at Joystiq. We can’t wait for September 20th to come around – are you excited about the game? We asked you earlier this week if you thought Killzone 3 on the PS3 was better than Call of Duty: Black Ops, but we have a feeling that everyone is going to be talking about Gears 3 after it releases.

Let us know your thoughts on the new weapons.