How many times have you decided to purchase a car, only to find that you will be hit with a huge Gas Guzzler Tax? The strange thing about this is that it only used to apply to cars and not other vehicles such as SUVs and minivans. However, that has changed for this year. What drivers need to know is, what will they be paying for their 2011 car? As you would imagine, this will be based on what type of vehicle you go for, so a little common sense is needed when choosing a new model.

Some of you will wonder why other vehicles did not have to pay Gas Guzzler Tax; and the reason for that was because the act was established in 1978, which meant that there were not that many SUVs on the road. However, that has now changed for 2011, so more vehicles will now be included?

You do not have to be a genius to know what the fuel-economy leaders are; so will pay less tax, as we have mentioned them many times. Top of the pile for 2011 models is currently and has been for a while the Toyota Prius, which as we know is a hybrid. Looking over on the government’s EPA website we can see that there are three cars all with the same fuel-economy rating, so should all pay the same amount of Gas Guzzler Tax; these are the Ford Fusion Hybrid FWD, Mercury Milan Hybrid FWD and the Lincoln MKZ Hybrid FWD. 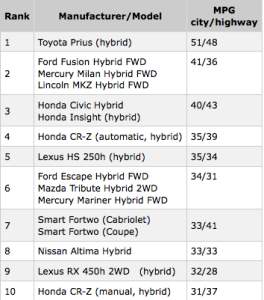 Now looking at the other end of the scale, those that will pay the most include the Bugatti Veyron, and with fuel ratings of 8mpg city and 15 highway, it’s not hard to see why. What made us laugh was how the 2011 Ford E350 Wagon was not that much different to the supercar above, with ratings of 10/13 for city and highway respectively. 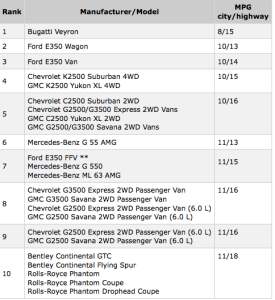 More details on fuel economy ratings can be found on the EPA website, highest here and lowest here. Now that the Gas Guzzling Tax has been extended to cover the likes of SUVs and minivans we could finally see less types of these vehicles on the road?