The latest transfer news this week is again keeping prospective FIFA 16 owners on their toes. Manchester United fans especially are on red alert, with persistent rumors suggesting that Gareth Bale could be on Man United’s FIFA 16 team in time for the new season.

It’s not the first time that we have heard such rumors, but with the transfer window almost coming to a close, you can bet that Bale to Man United is one of the biggest talking points on social media right now.

Will it happen though? We are talking about the world’s most expensive player moving to a new club so soon after his Real Madrid transfer and with no real suggestion that he is unhappy playing in Spain either. 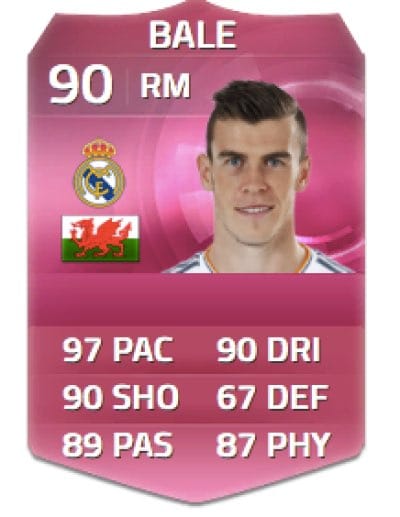 On FIFA 15, Bale has some fantastic cards available on Ultimate Team – the highest of which is a 90 rated Futtie card, as well as an 88 in-form card earned during Team of the Week 29.

Will he be on Manchester United’s first team by default though by the time FIFA 16 launches this Autumn? If so, don’t be surprised if EA decides to upgrade the player to an 88 from 87 either after a solid season.

If you play FIFA 15 daily as Manchester United, let us know your thoughts on this proposed transfer – do you think it will happen?

What do you think Bale’s rating on FIFA 16 should be?