Music lovers and Apple fans alike will be excited to hear that the company’s popular GarageBand music creation software will from now on be available to the iPod Touch and iPhone as well as Mac computers. GarageBand has been available on the iPad for a while now and has been very successful; the company recently announced that it can be enjoyed on these other iOS devices too from now on.

For those that are unfamiliar with the software, it is an application from Apple that allows musicians (novice or experienced) and others interested in music to create their own great sounds and melodies. The software is reportedly so easy to use that even those who have never played an instrument or studied music before will be able to use it. It features Smart Instruments that allow users to select chords from a library offering a wide variety of choice.

Philip Schiller, Apple’s Senior Vice President of worldwide product marketing says ‘The innovative multi-touch interface combined with Smart Instruments makes it easy to create great sounding instruments.’ Users can also mix and record up to eight tracks which can also be shared with friends. When an electric guitar is plugged into any of the devices or another acoustic sound or voice is played through the microphone, it can be played and recorded with stompbox effects or through classic amps.

As PC World explains, for those that already own the app on the iPad, it can be downloaded to their other iOS devices for free, first time users will have to part with $4.99. Support for the app is offered by the fourth and third generation iPod Touch, iPhone 4S, iPhone 4 and iPhone 3GS as well as the iPad 2 and iPad. Will you be downloading this app to your iPhone or iPod Touch? 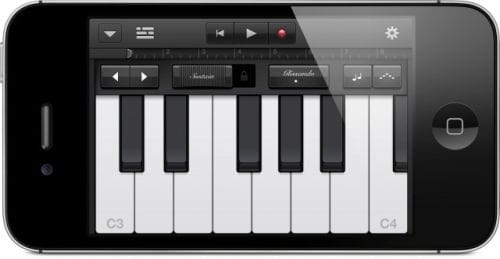