Let’s step away from all of the doom and gloom regarding the PS3 release of Dawnguard for a moment. Some brilliant individual has added a new mod into the PC version of Skyrim which recreates the latest global phenomenon, otherwise known as the Gangnam Style dance.

For those that are still unaware of this craze that has attracted the most likes on a YouTube video in history, head to the official video here to familiarize yourself with the dance. Once you’ve seen that, check out the hilarious recreation in Skyrim below – the level of detail that the creator has gone to is impressive to say the least.

For the moment, you can only get your hands on this if you have the PC version of Skyrim and you can find the plugin at Casual Mods if you’re interested – you’ll need a website translator though, as the site is in Russian. Will this new Skyrim plugin take off to the levels of the now ancient ‘arrow to the knee’ jokes? The official video shows no signs of slowing down on the charts though, so it’s likely. 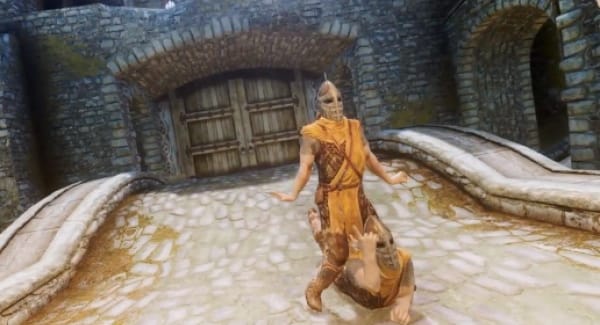 A lot of people find the official video utterly annoying, but we can’t help but admit that it is a little catchy. The Skyrim plugin also includes the infamous ‘elevator’ scene from the real clip, which you’ll find at 2:14 into the video.

What game is next to be given a dose of the Gangnam Style treatment? Don’t be surprised if we see it turning up in the likes of Grand Theft Auto V next with the pedestrians performing a mass Gangnam Style dance off.