Microsoft has now finalised the official Games with Gold September 2015 games list on Xbox One and Xbox 360. Right away, we can see that they are going to be offering a better selection than what Sony are offering with PS Plus September 2015.

This is not the first time that this has happened either, as Microsoft seems to be on a roll in offering higher quality content with their subscription service compared to Sony in recent months.

To give you a comparison on the titles, Microsoft will be offering up The Deer God and Tomb Raider Definitive Edition on Xbox One.

Xbox 360 players are also in for a treat with Battlestations Pacific and then none other than Crysis 3 – a game that holds a 76 critic rating on Metacritic.

PS Plus subscribers on the other hand are getting Grow Home, Super Time Force Ultra and Xeodrifter on PS4. Available on PS3 for September is Twisted Metal and Teslagrad – the latter is also available on PS4 too with cross play.

Ask 90% of gamers what would they rather have between Super Ultra Time Force and Twisted Metal on PlayStation Vs Crysis 3 and Tomb Raider Definitive Edition on Xbox and we think the AAA games win out every single time. 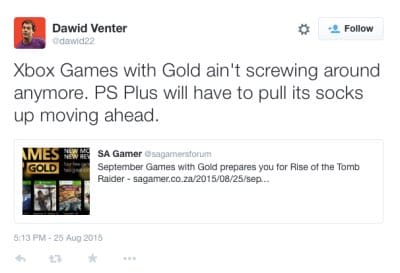 You also have to take into consideration that Crysis 3 will also be available on Xbox One in the future via backwards compatibility – making the Games with Gold subscription even more worthwhile now.

Many fans are saying that Sony need to step it up as they are falling behind with the quality of games compared to what Microsoft is offering.

Platform loyalty aside, would you agree this in saying that Microsoft are offering better at the moment for the subscription fee?

Give us your thoughts on both sets of games on the two platforms for September.