This is the biggest year in the UK where retailers push an American sales event, as seen with the latest GAME UK TV ad for Black Friday that promotes an Xbox One bundle at £299. We have never seen such a deal with so much included being advertised by this UK gaming retailer.

The new Xbox One bundle couldn’t be found on the official GAME.co.uk website at the time of writing, but we did manage to get a screenshot of the TV ad running on Thanksgiving 2014 for Product Reviews readers. You can see the promoted Xbox One bundle in the screen below that includes Lego Marvel Super Heroes, Forza 5, Assassins Creed Unity, and Assassins Creed Black Flag with the latter three games being digital downloads. You will get £5 of Xbox Live credit as well. 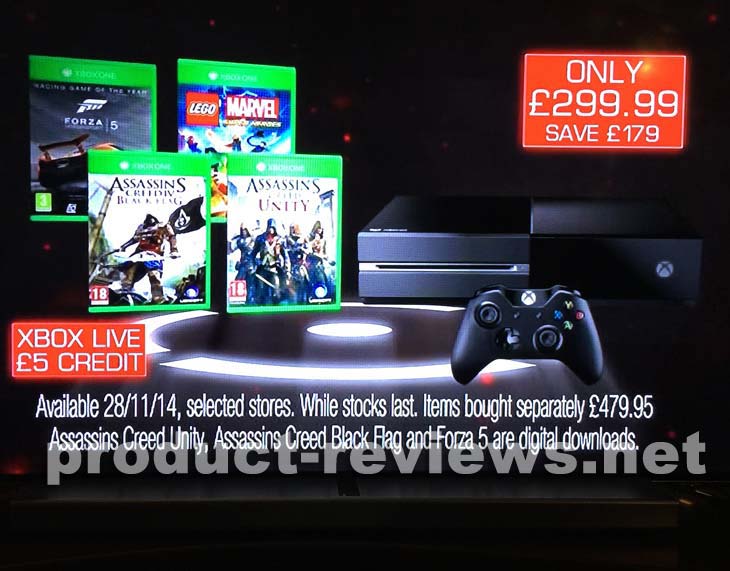 GAME make it clear that the Black Friday bundle is only while stocks last, at selected stores, and only on November 28, 2014. As you can see in the screenshot, the TV ad points out that if you purchased all these items separately you would pay £479.95. This results in a massive £180 saving, so if you haven’t jumped onto the new generation of consoles just yet, then this might be the time for you.

Will you be heading to GAME UK for this Xbox One bundle tomorrow? We haven’t heard about any PS4 bundles at GAME UK being given such a big discount, so we will leave our readers to debate if Xbox One needs this sort of discount or not considering the PS4 sales figures. Microsoft’s latest console has apparently been doing very well in recent sales results.