Call of Duty: Modern Warfare 3 is proving to be the most, if not certainly one of the most hotly anticipated game releases of the year, and it’s really not that far away anymore. We have been providing our readers with as much content as we can in the build-up to its release, even covering news about the game that’s looking to be its closest rival and just as anticipated, Battlefield 3. For those that aren’t concerned about EA’s title, where the best place to get MW3 will be their main concern.

One place that has unveiled a good deal to help with that decision is GAME, who is offering double XP with MW3 pre-orders. The feature comes part of an inclusive deal that the retailer is currently offering where those who pre-order from their store receive exclusive content known as the Classified Intel Pack. This pack features an exclusive PS3 theme, an SAS avatar, a Brady strategy guide and of course double XP for the first four hours of multiplayer game time, a deal which is also being offered by Gamestation, according to CVG.

GAME’s Neil Ashurst expressed how well they know their consumers and what the game release means for them by saying ‘The build-up to Call of Duty: Modern Warfare 3 is huge… We know how important multiplayer is to our customers so it’s great to be able to give them double XP.’ He also stated their belief that MW3 ‘is set to be the biggest multiplayer gaming experience of the year.’

In a recent article we revealed just what the release of the MW3 means to GAME as a company too. A large percentage of their profit making relies heavily on the release and success of big name games such as these. Another game they will also be relying heavily upon to do well is FIFA 12, which is available in the UK as of midnight tonight.

What do you think of this offer from GAME? Will you be getting MW3 from there? 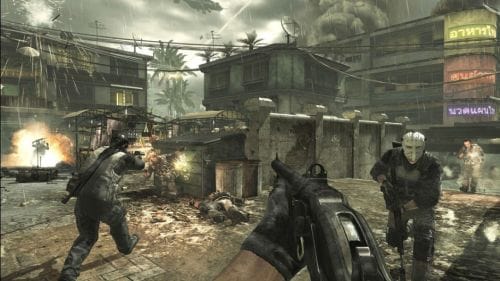