It was at the end of MWC 2014 that we were left wondering what on earth happened to the new Samsung Galaxy Tab 4 series, as we were expecting to see the new tablet range announced alongside other Samsung products. A few weeks have passed since and now we might have some details.

We already offered details on the 10.1 inches version but the Galaxy Tab 4 7.0 still remained elusive, until now. A new image has been teased and we get a front view of its design. Okay, it’s not like the specs details that we already assume to know on the Galaxy Tab 4 10.1 and 8-inch, but we’ll take all we can at the moment.

The image, or press render for @evleaks, also teases a possible Samsung Galaxy Tab 4 7.0 launch date, which looks set to be April 24, although we have to take this rumor with a grain of salt. 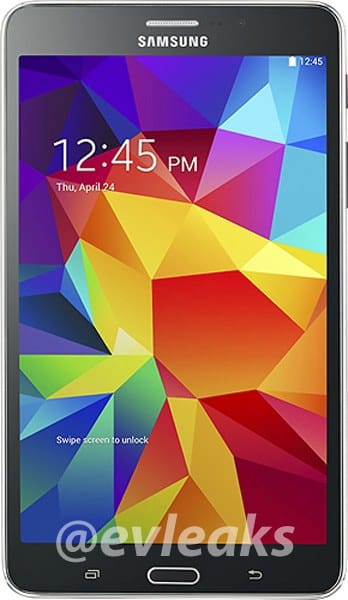 If the press render, above, is the real deal, then it will be as though Samsung has taken the Galaxy S5 and blown it up, which isn’t a bad thing.

Looking at the proposed design you can clearly see that Samsung is sticking with the same tablet design philosophy, which means there will be a capacitive back and multitasking buttons, along with a physical home button to the front of the tablet.

Proposed Samsung Galaxy Tab 4 7.0 specs include a 7-inch display with a screen resolution of 1280 x 800p, a 1.2GHz, Quad-core processor, 8GB of storage, 1GB of RAM, 3-megapixel rear-facing and 1.3-megapixel front-facing cameras. While these may not be high-end features, these do seem pretty good considering the market these tablets will be aimed at.