We still have no clue as to when the Samsung Galaxy S5 Prime release date will be, but at least we have a far better idea as to its design. While it is not certain, there is a very good chance that the Prime version of Samsung’s flagship handset will come with an aluminum shell, which is surely to help it compete with the HTC One M8 in terms of design?

The Galaxy S5 has proved very well in terms of specs, but has been slated by some of you because of its design, which feels much cheaper and of less quality than the HTC One M8, and this would have also been the case against the LG G3.

It has to be for those very reasons why Samsung has felt the need to bring the Prime version to market; otherwise sales could be affected in a negative way. However, Samsung could have an ace up its sleeve, and that is by bumping the specs on the new Galaxy S5 model.

Ever since rumors of the Galaxy S5 Prime came to light there has been speculation that Samsung could beef up the specs, although this could be wishful thinking.

Rumored Samsung Galaxy S5 Prime specs — Samsung is very likely to go with an aluminum finish rather than LG G3’s brushed metal, a faster Qualcomm Snapdragon 805 processor, 3GB of RAM instead of 2GB on the standard S5 and a 2K display, which we had assumed would have been on the standard S5 model. 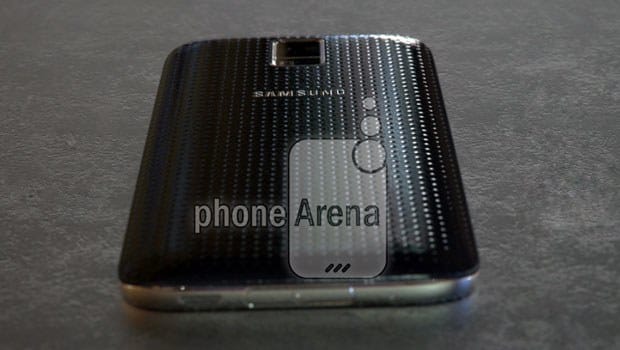 Image thanks to Phone Arena.

As for the Galaxy S5 Prime software version, there is a good chance that it will make use of Android 4.4.3, seeing as though we should see it released on the Nexus 4, 5, 7 and 10 later this week, although that is just speculation at this time.

Like we already said, all this is speculation, but it will be interesting to see how Samsung is able to spin this one, as many of you would have already used your upgrade to get the current S5. If they had known a premium model was coming, surely they would have waited?