If you want to know the story behind the Galaxy S3 then you need to see the video embedded below this article, which tells how the development team came to design Samsung’s Galaxy S3 the way they did. In the video you’ll see a number of interviews with Samsung’s very own designers, and they explain the process behind the new flagship phone and how the design creates a better connection with users.

Inspiration from around the world — one of the designers explained how they took inspiration from Singapore, and wanted to design the Galaxy S3 in a way that would reflect certain elements of nature like sunlight and the flow of water. See the video below to understand more about the motivations behind the Galaxy S3, and how the final design came to be. You will notice the video is not in English, but there are English subtitles that make the information easy to digest.

Samsung Galaxy S3 vs. iPhone 4S by design stories — Apple are well known for launching a video after a new product releases, and in most cases these videos tell the story behind the product and include a number of interviews as well. The second video below is the official iPhone 4S commercial and talks about the design of Apple’s 5th generation iPhone, so take a look at both the videos and let us know how you think they compare in design and what each company has tried to do with the finished smartphone.

It’s worth noting that the iPhone 4S is around a year old now and the iPhone 5 should see a release date next month, so it might be better to compare the Samsung Galaxy S3 to the new iPhone 5 commercial in the next couple of weeks. Keep connected to PR as we’ll compare the new iPhone to the Galaxy S3 when we get the official specs, which should be early next month considering there’s an event planned for September 12. 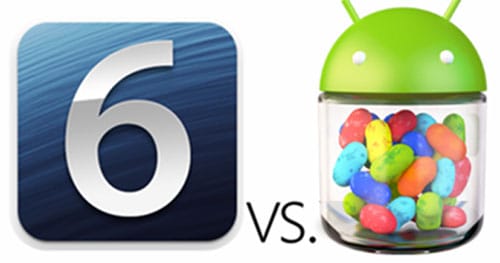 Apple’s iOS 6 vs. Android Jelly Bean – The battle will continue between Samsung and Apple for many years to come, although the choice of smartphone is likely to be favored by each operating system. Some people want nothing more than iOS 6 and others love Android Jelly Bean, so the hardware is an easier choice if you prefer either of these. The iPhone 5 might be due within a matter of weeks and could better the Galaxy S III in a number of ways, but the same can be said for the Galaxy S4 that’s expected early next year. You can also see how voice commands compare on iOS 6 and Android Jelly Bean in an earlier article.