It is now very obvious that Samsung are pushing the Galaxy S3 Jelly Bean update out to select countries in what seems like a test, and while our US readers would love to see Android 4.1 Jelly Bean on their Galaxy S3 right away, this might be too much. We first reported about Poland receiving the new software at the end of last month, and now it seems like the update has arrived in the Nordic region.

Several sources claim that Samsung Galaxy S3’s in Sweden are seeing the Jelly Bean update, which is sized at just under 279MB and the finer details can be seen in an image below, which is obviously not in English. If you look at the same page on your Galaxy S3 you’ll be able to work out out all the figures, although it’s pretty clear that the Jelly Bean version is Android 4.1.1 and firmware baseband is I9300XXDLID.

This source claims the Jelly Bean update being pushed out to the Samsung Galaxy S3 in Sweden is meant for the Telenor network, although they’re not sure where the new software will head next but it is more than likely to stay in Europe for now. This won’t make our US readers happy, but at least they won’t need to test bugs and by the time it lands across the Atlantic it should be pretty much problem free. 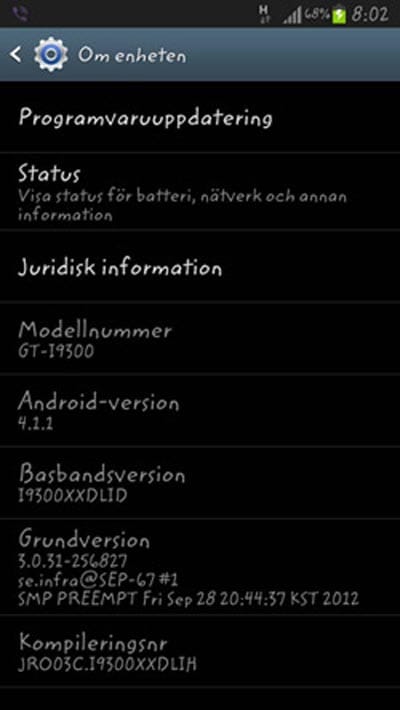 If you’re desperate for Android 4.1 on your Galaxy S3, let us know what country you’re in? It seems more of a tease for those countries just a few hundred kilometers away like Finland, which includes Galaxy S3 owners desperate for the Jelly Bean update, and while they are very close it’s still not enough.

One of the best places to look for software updates to Samsung smartphones is this Twitter account, which is quick to tweet devices that are receiving new Android software and this includes the Samsung Galaxy S3 and Jelly Bean by country, so this is well worth bookmarking if you haven’t done so already.

When will the United States receive the Galaxy S3 Jelly Bean update? Our readers have certainly made it clear that the slow updates Samsung are providing is becoming frustrating, and some users are threatening to leave the brand if they keep taking so long to bring the latest major Android update like Jelly Bean. At the time of writing it seems that Jelly Bean will finally make it to US versions of the Galaxy S3 within the next month, which will include Sprint, AT&T, T-Mobile, and US Cellular although Verizon is more of a mystery.

Considering Google is about to launch Android 4.1.2 on the Nexus, do you think Samsung need to be quicker with software updates and deliver a solid release date?