Consumers in the US are still waiting for the Galaxy S3 to be updated to the latest version of Android 4.1, but now you could have an alternative opportunity to get your hands on that elusive Galaxy S3 Jelly Bean update.

All the talk has been on Samsung’s continued delay on getting an official update to Jelly Bean out for current Galaxy S3 owners. Now the wait could possibly be extended even further with the official announcement of a Samsung Galaxy S3 Mini version of the popular smartphone.

Samsung has wasted no time in confirming that a 4-inch version of the Galaxy S3 will be available this week on October 11th, but only in Germany first of all as Samsung once again outlines their priority to shipping out their new smartphones in Europe first before everywhere else.

At the moment, official specifications other than the 4-inch display are unknown, meaning that there is no confirmation yet on whether this Mini version of the Galaxy S3 is going to ship with Jelly Bean out of the box, or remain on Ice Cream Sandwich. Consumers will obviously hope it ships with Jelly Bean and it would be somewhat embarrassing for Samsung if they could stage another exclusive event in Germany just to reveal a brand new product with an outdated version of Android. 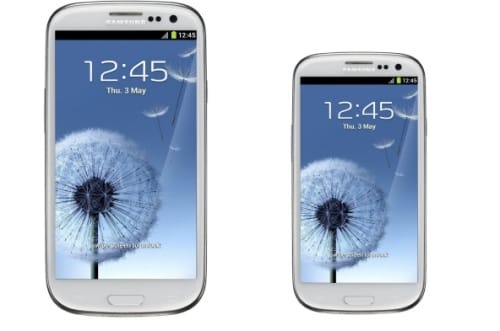 Another area up for debate will be what processor Samsung decides to use when the device launches in Europe and the US. It is almost certain that European users will get a quad-core Exynos processor of some sort, but will Samsung change the device for the US release this time around, or keep the specs the same as the US Galaxy S3?

We say this, as the US version of Galaxy Note 2 now ships with a 1.6Ghz quad-core processor across all regions, unlike the US Galaxy S3 which only came with a 1.5Ghz dual-core chip. Hopefully Samsung will use the same tactics for the US Galaxy S3 Mini, leaving those who didn’t pick up the original with a very exciting 4-inch device indeed.

Is this another move to combat Apple’s 4-inch iPhone 5? If you have the Galaxy S3, let us know how you would feel if the Mini version ships with Android 4.1 Jelly Bean out of the box, delaying your official update further.