The most recent documentation for the Samsung Galaxy S3 GT-I9300 Android 4.4.2 update reveals the software is currently unstable with no ETA, although we do notice the Galaxy S3 LTE (GT-I9305) version is completed and could even be on a number of our readers phones right now.

You can see one of the latest reports in the screenshot below, which is thanks to a number of documents published by this popular smartphone news website reporting on all things Samsung.

It is clear to see the GT-I9300 Android 4.4.2 update is currently unstable, the LTE version is completed along with Galaxy S4 Mini / LTE, and the Note 2 LTE is available already. Towards the bottom of the screen you can see final testing has started for Galaxy Grand 2, Mega 5.8, and 6.3 devices, but both the Galaxy Note 3 Neo and Galaxy S4 Mini LTE status are listed as “pending”. Release date months can be seen in the ETA column with launches between this month and next. 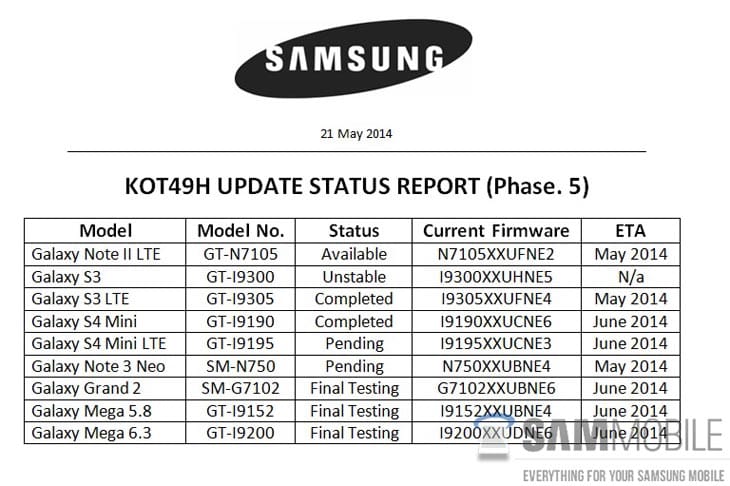 Within another document on Sam Mobile, you will see that the Android 4.4.3 update is currently being integrated with testing on Samsung’s Galaxy S5 and Galaxy S4 LTE-A.

What version of Android are you hoping to download soon and on what Samsung smartphone? Some users claim the real news within these documents is the fact that Samsung is trying a new i9300 (S3) build from May, although back in April we thought this was canceled.