We told you about Samsung’s new Galaxy Note Pro 12.2 tablet that is on the way, but we’re yet to tell you about the exciting new Galaxy Note Pro accessories that are available with it. We have confirmation that Logitech has wasted no time in supporting the new tablet, by offering the impressive looking Logitech Pro Keyboard Cover.

While Samsung are yet to officially announce US and UK pricing for the Galaxy Note Pro yet, we can see that Logitech hasn’t followed the same tactics.

If you are looking for an experience similar to the Microsoft Surface Pro with regards to a portable snap and go keyboard, the Logitech Pro Keyboard Cover may be your answer.

We can confirm that the Logitech Pro Keyboard Cover price in UK is going to be £109, while those looking to get one when the Galaxy Note Pro launches in US, will have to pay $129.99.

You can pre-order the keyboard case right now over at Logitech’s website, with shipping expected to start sometime in February. 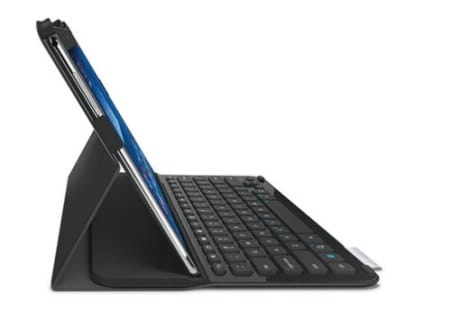 Much like the sexy Nokia 2520 keyboard cover which we told you about here, Logitech’s cover will double up as a protective Galaxy Note Pro case, keeping your lovely tablet away from harm.

The keyboard itself is made from durable, wipeable materials while there’s even some bonus functionality included on the keyboard in the form of Android short keys which we think you’ll find very useful.

Like the iPad Smart Cover, you can flip this around and also use the case as a vertical stand as pictured above, when wanting to watch media from a comfortable angle.

To give you an even better preview, watch the two video clips that we have included below which show off Logitech’s new Keyboard Cover live during January’s CES event.

Is this something you wouldn’t mind paying £109 or $129.99 for, or do you believe that the price is too much considering that the main tablet is already going to be very steep?