Samsung has turned a lot of heads after this year’s CES 2014, notably due to the reveal of two brand new tablets that will arrive over the coming weeks. This week, we focus on one of them – the Samsung Galaxy Note Pro 12.2 and how it compares vs the popular Galaxy Note 10.1 2014.

If you picked up the Galaxy Note 10.1 2014 last year over the Holiday sales due to the missing Nexus 10 2 tablet, you are probably very interested to know how the 10.1 2014 compares against this new tablet that is on the way.

For example, both the Galaxy Note Pro 12.2 and Galaxy Note 10.1 2014 come with a 1.9Ghz Octa-core Exynos 5 processor. Both also utilize 3GB of RAM and both feature an 8 megapixel rear camera with 2MP front-camera. 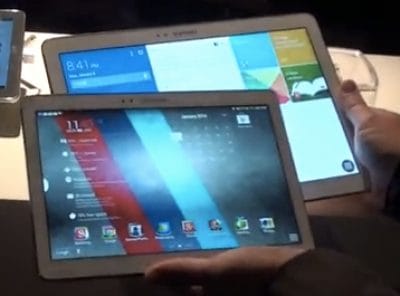 Samsung’s newer tablet will also ship with Android 4.4 Kitkat out of the box, whereas the Note 10.1 2014 comes with Android 4.3 Jelly Bean. This isn’t a big problem though, as it only takes a software update to bring the two tablets up to the same level.

The display resolutions are exactly the same too, which is an important point. The size may differ between the two, but Samsung are still offering a 2560Ã—1600 resolution on both.

The graphics setup is also the same as well – using either a Mali setup on the WiFi version or Adreno 330 on the LTE model – so gaming performance will not suffer if you pick up the Galaxy Note 10.1 2014 instead. 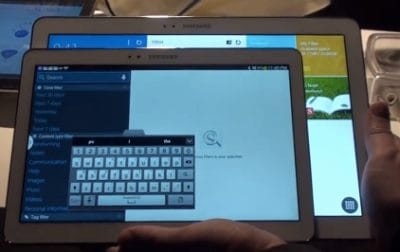 With this in mind, you may want to question whether it is truly worth picking up the Galaxy Note Pro 12.2 over the Galaxy Note 10.1 2014 edition. If size matters the most, perhaps – but based on specs there are not too many differences.

Take a look at the included clip for a close-up look at both tablets. Give us your thoughts on these two devices and whether you agree that Samsung has made it hard to consider the Pro version at the moment.