We have some good news for those of you who are looking forward to the Samsung Galaxy Note Pro 12.2 LTE release date. We already know of plans to release the WiFi version over the next couple of weeks, but now details have emerged suggesting that the first carrier that the Galaxy Note Pro 12.2 could land on, could be Verizon.

Throughout 2013, Verizon customers may had to put up with the tag of being the carrier that released products ‘last’, compared to rivals AT&T, Sprint and T-Mobile. However, perhaps 2014 has turned a leaf for Big Red and the company may end up with a timed-exclusive on Samsung’s latest flagship tablet.

The Galaxy Note Pro 12.2 has now been spotted on the trusty FCC website, along with bands that match up with Verizon’s supported LTE bands. So far, Samsung has been quiet on the LTE Galaxy Note Pro 12.2, but those who wish to get one on contract with Verizon may prefer it over paying an extortionate amount for the WiFi version.

As always, there’s no confirmation of release date yet, but an appearance on the FCC website usually suggests that a release isn’t too far off. 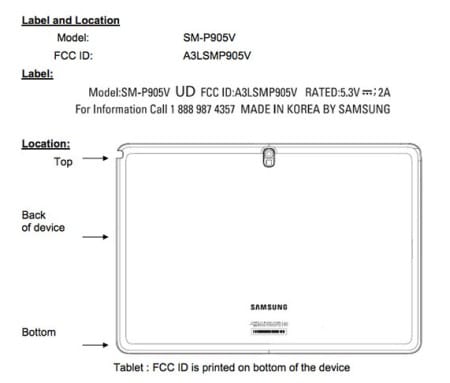 Hopefully we’ll be able to bring you some early details on whether the likes of AT&T, Sprint or T-Mobile will also be planning to carry the Galaxy Note 12.2 Pro on their books – AT&T looks like a certainty at some point in 2014.

Would you prefer to buy the Galaxy Note Pro 12.2 on Verizon if the price is right? These tablet costs are getting very high it has to be said, so let us know the right price that you wouldn’t mind paying for.