When consumers got hold of the Samsung Galaxy Note 8.0 in Europe the tablet doubled as a phone as well, but now the device has gone to the US the radios has been removed, making it just another 8-inch tablet.

So how does the Galaxy Note 8.0 stand out in a small 8-inch tablet market? The simple question is because the hardware is far newer than many of the other tablets in the same market, which is one of the reasons Samsung can get away with charging $399. However, this is still going to be a tough tablet to sell, so Samsung will have to do some clever marketing.

There have been several Galaxy Note 8.0 reviews, which looked at many of the tablets features, such as its hardware, display, software and its camera. However, what we are more interested in is a Galaxy Note 8.0 performance and battery life review, and thankfully Engadget has looked at these areas extensively.

The Note 8.0 packs a 4,600mAh, and while this is pretty big, it’s still not as big as it could be, which is evident when compared to the iPad 4, iPad mini, Galaxy Tab 7.7 and most other tablets come to that matter. To give you an idea just how bad the battery life is, check out the table below. 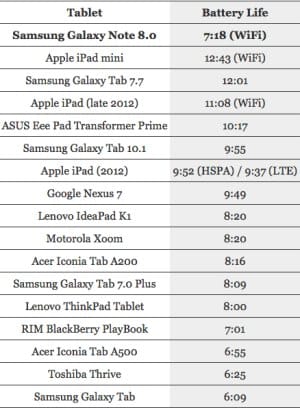 As for performance Engadget was unable to compare it next to the iPad, but they were able to compare the performance of the Galaxy Note 8.0 to other Android tablets. Again there’s a diagram below for you to see how Samsung’s latest tablet compares. 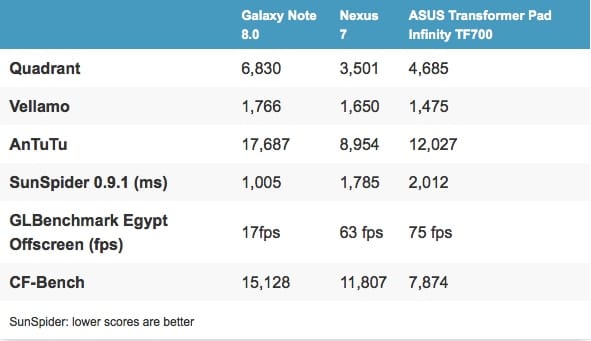 Overall, this is one of the best tablets Samsung has to offer, but they have spoiled things a little by taking out the HSPA+ radios for the US market. Although if they had not, imagine how poor the battery life would have been then?