Apple may have their iPhone 6 on their way, but to all Android owners on the other side it is just about the upcoming Samsung Galaxy Note 4 release date. We are expecting to see Samsung’s latest flagship Note later this year and now it looks like the some Samsung Galaxy Note 4 benchmarks have revealed some further information on the device.

As some of you may have heard from rumors, the Galaxy Note 4 LTE may be coming with the top of the range Qualcomm Snapdragon 805 chipset. We say may but now this has seemingly been confirmed by showing up in the latest AnTuTu benchmark for the unannounced product.

The Snapdragon 805 is going to offer stellar performance as you can imagine, coming with features such as a quad-core Krait 450 2.5GHz speeds, as well as improved graphics performance thanks to Adreno 420 – a significant upgrade to the Adreno 330.

There will also be a Exynos variant of the Galaxy Note 4 too of course and this has shown up on AnTuTu as well. Specifically, it now looks like the Samsung Galaxy Note 4 International model will run on a Exynos 5433 processor, offering 8 Cortex based chips. 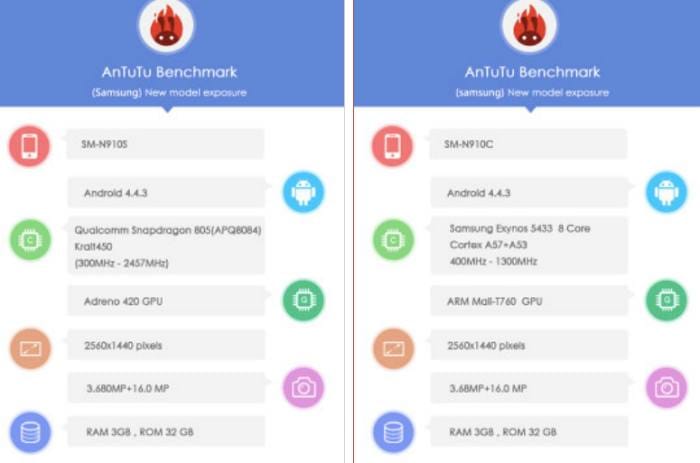 Graphics for the Exynos version will be handled by the new ARM Mali-T760 GPU – very exciting stuff indeed for fans of this setup. As for the benchmarks in question, it looks like the Exynos outperformed the Snapdragon slightly, which you can see evidence of over at AnTuTu here.

For those that are planning to pick up the non LTE version, this is a good sign that the Exynos model is going to fit perfectly in your plans. Let us know what you think of both processors in question and which model you are going to buy later this year.

Remember that IFA 2014 starts on September 5 and could be the moment when we will see the Galaxy Note 4 official announcement.