There has been a surprise winner in one of the strangest comparisons we’ve seen, which involved the Samsung Galaxy Note 2 vs. Apple’s iPhone 5. The devices were compared visually and covered areas such as features, popularity, performance, and also those important reviews, but this visual comparison also proves that popularity can beat the raw specs for each device.

Samsung’s Galaxy Note 2 certainly shows superiority when compared to the iPhone 5 features, and we’re not talking about iOS 6 vs. Android 4.1 Jelly Bean, but rather the screen size/resolution, memory, and processor that have been voted better on the Galaxy Note 2. This didn’t seem enough considering the visual review by Sortable resulted in the iPhone 5 winning by 53 points to 41 for the Galaxy Note 2.

You can see some of the comparisons in the images on this page, which shows the iPhone 5 features and specs head-on with those of the Galaxy Note 2. If you want to see the detailed review then you can do so on this Sortable page, which includes a breakdown of each of the important areas for both smartphones. 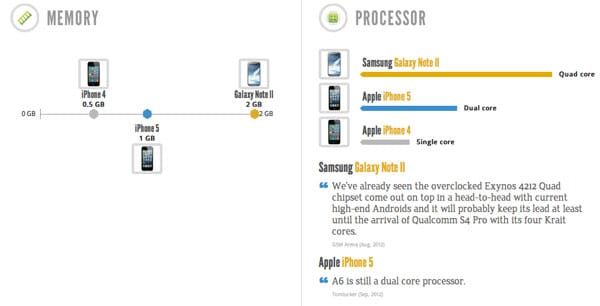 Do you understand how the iPhone 5 can be so popular? The list of positives for the Samsung Galaxy Note 2 are much longer than those of Apple’s iPhone 5, but this didn’t seem enough when looking at the popularity of Apple’s smartphone, which smashed the Galaxy Note 2 by 100 to 24. This alone shows that the popularity of a device can help it sell much more than rivals, and in the case of the iPhone 5 it seems that Apple don’t need better specs to beat the competition.

Personally we prefer the new iPhone 5 as well and also own that device, but this has been thanks to using every generation and spending a lot of money on apps and other things that make it hard to leave Apple. We’re not alone here and thousands of users have owned most iPhone’s, which makes it hard for them to jump ship after so long, although most would probably not want to unless they’ve had enough of launch problems like seen with iOS 6 maps. Seasoned users know that Apple fix most teething problems in time after one or two software updates.

Bottom-line: We like the comparison that Sortable have done and find it interesting, but doing an iPhone 5 vs. Galaxy Note 2 comparison is like comparing chalk to cheese. Both of these smartphones are for different markets, and Samsung’s Galaxy Note 2 really shines for those people that don’t want to buy a separate tablet.