If you’re waking up today thinking about placing your Samsung Galaxy Note 2 pre-order, then you might want to check the release date for AT&T and Verizon first. Most of our readers were focused on the Galaxy Note 2 price for different networks, but the delayed launch had previously upset those of you in the United States, so it might be a good idea to find out when the device would finally ship to you before ordering.

Samsung’s Galaxy Note 2 can be pre-ordered on Verizon Wireless today, which the image below clearly shows that the device “will ship by 11/27“. This will not make some people happy that have been waiting for months, and some thought they could get hands-on with the Galaxy Note 2 either today or very early in November. 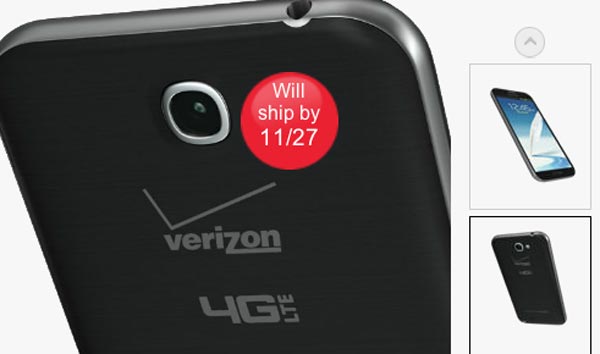 When it comes to the Galaxy Note 2 release date on AT&T it is a bit better, and the carrier claims their pre-orders should currently “ship on Nov 6, 2012“. This is a very important gap as far as consumers are concerned, which means those choosing AT&T will be hands-on 3 weeks before Verizon. We previously knew that Samsung would like the shipping dates staggered to make sure they could meet demand, and wouldn’t experience any major stock shortages. 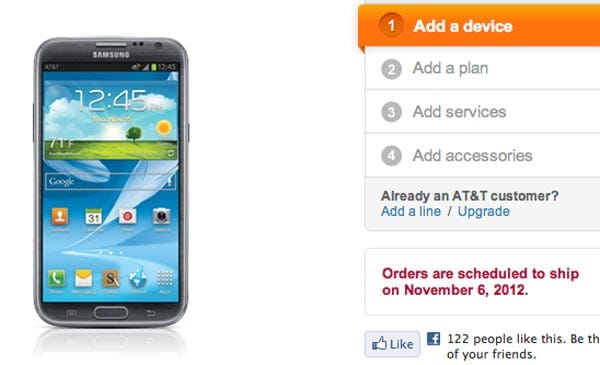 When it comes to the Samsung Galaxy Note 2 US price it seems that AT&T are offering a no commitment deal at $649.99, which is $50 cheaper than Verizon although both offer the same $299.99 2-year contract price. Earlier today we looked at what T-Mobile were offering and compared it to purchasing from Wirefly, which would save our US readers some money.

Most people would have decided on a carrier already, although we’d love to know if these Samsung Galaxy Note 2 shipping dates make a difference when choosing between AT&T and Verizon?