We have some more information on the imminent 4G LTE Galaxy Nexus to share with you now, information which you may want to pay particular attention to if you are wondering if the final price point of the Galaxy Nexus will be $199 or $299 on contract.

You may remember that during Black Friday 2011, the Galaxy Nexus was apparently scheduled to go on sale at the very desirable price of $199, on a two-year contract with Verizon. Since the phone didn’t arrive, that price is irrelevant now, but it is very relevant for consumers in the fact that Verizon had ‘planned’ to sell it at $199.

Now then, a fresh article published by the Wall Street Journal claims that the Galaxy Nexus will in fact come in at Verizon priced at $299 for a two-year contract with the carrier. As you know, $299 is the standard entry price for all of Verizon’s 4G LTE phones, so the fact that the Galaxy Nexus is no different shouldn’t be too much of a surprise for you.

On the other hand, some of you may feel that Verizon should bring the price back down to $199 like they intended to during Black Friday, in light of the obvious lack of information on when the device will be available to buy, leaving consumers in the dark in the process.

In other news, a picture obtained by Droid-Life shows off what could be the official retail packaging for the Galaxy Nexus. You may be surprised to see that the box is almost completely bare, except for a faint Verizon logo and very little else. Perhaps this is Verizon’s ‘genius’ idea of having a plain box to signify that the Galaxy Nexus is a pure Google experience – almost anyway since there’s still a few Verizon apps thrown in there. 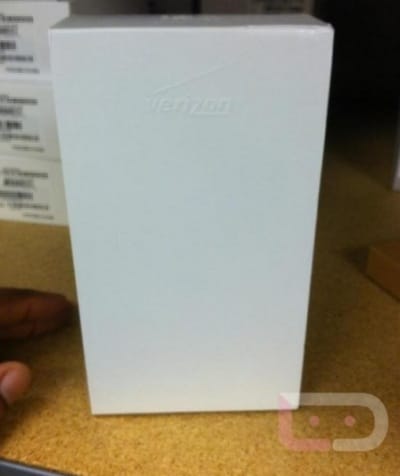 What are your thoughts on the $299 price point on contract, and the surprise plain retail box for the G Nexus?