We have some more rumors to share with you now regarding the highly anticipated Galaxy Nexus release date in the US. It looks like previous speculation regarding a Black Friday release for the Android 4.0 device may be inaccurate as the phone may be coming after the Thanksgiving holiday celebrations.

It seemed unlikely for Verizon to release a device on Black Friday anyway, but a leaked Verizon roadmap obtained by those ninjas at Droid-Life reveals that Big Red has no plans to sell the device before November 28th.

Take a look at the image below, you’ll clearly see that Verizon has marked the Galaxy Nexus down for a release after Black Friday, and not before, meaning that it could launch at anytime after November 28th and obviously into December.

We feel a sense of de ja vu coming along here, as we recall similar release date mysteries that happened for the now seemingly extinct Motorola Droid Bionic. Fans were dying for that handset to come out after Motorola’s continuous delays, and now it seems like consumers are getting frustrated on a lack of official information regarding a release for Google’s first Ice Cream Sandwich handset. 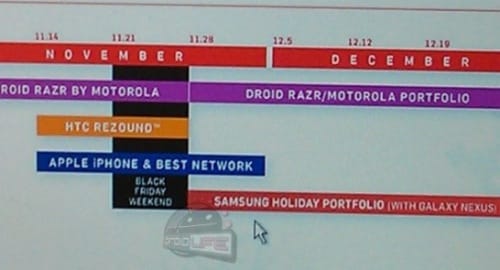 It’s perhaps even more frustrating for Verizon customers if you take into account that UK consumers have already been given a solid November 17 release date for the Galaxy Nexus launch in Europe. We have a feeling that there’s a fair few of you who even waited for the Droid Bionic to come out, and then decided to skip that device when the ‘Nexus 4G’ rumors first kicked off – meaning that you could have been waiting for the best part of a year to get your hands on a new Android handset since the Droid Bionic was first announced at CES way back in January of this year – Are any of you in that painful reality right now?