With news on a possible release date for the Samsung Galaxy Nexus (which will follow shortly) we can now report that the Ice Cream Sandwich handset will soon be available in Australia on two carriers. So here we have a few release particulars from both Vodafone and Optus.

According to the Good Gear Guide both carriers have released their pricing details, so let’s takes a look at Optus first, who promises their customers that they will have the Galaxy Nexus in their hands by December 20, 2011. There are to be four monthly plans, which are priced as follows, $29, $49, $59 and $79. However, you will need to sign up to a 2-year contract. There are other plans, which you can see for yourself in the image below. One of the plans will allow you to obtain the handset for free. 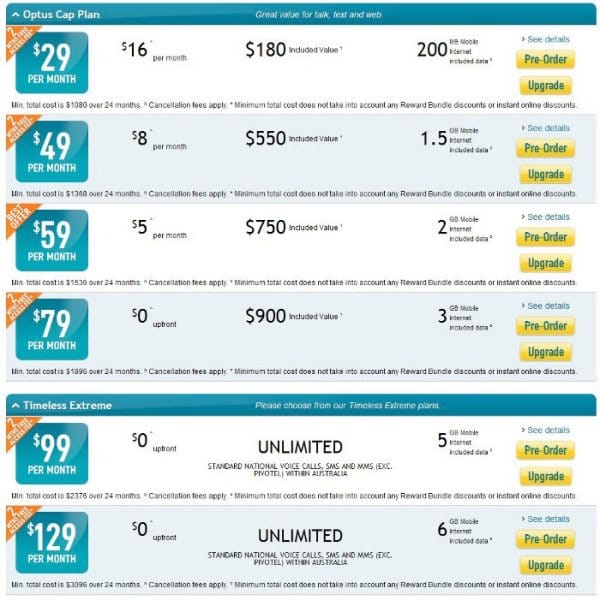 These handsets will have the same release time-frame as Vodafone in Australia as well, although they will need to pre-order them before December 16, in order to take advantage of this early release. We would advise those who want the new Google Android handset to not hang around, as we all know how strained the postal service and couriers get in the build up to Christmas.

We are very surprised that Optus is only offering the Galaxy Nexus on a 24-month contract, when their rival Vodafone has a 12-month option. The latter’s price plan is a little more complex, as they have to take into consideration the length of contract, which you can see by the image below. 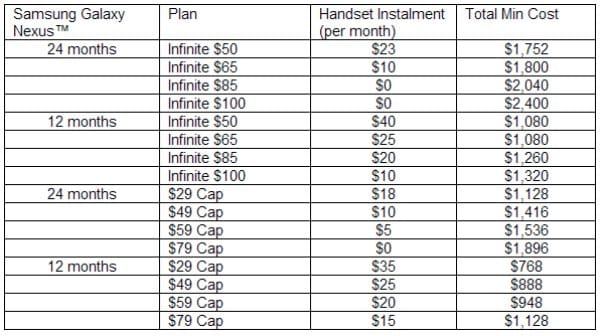 For those who were hoping to pick up Samsung’s new handset for free with Vodafone Australia, then Delimiter tells us that you will have to opt for the $79 per month plan. However, you do have the option to pay just $5 per month for the handset, but you will still need to sign up to the $59 on a two-year contract. Make sure you read up on what Gary will be reporting later regarding the US release of the Galaxy Nexus.