We are currently quite overwhelmed by what Samsung and Google just revealed at the Ice Cream Sandwich event, however one thing which we stuck out for us is the fact that both of today’s ‘4G’ technologies will be supported by the Galaxy Nexus, there will be individual models for LTE and HSPA+, which means that most carriers will be keen to add the first-ever Ice Cream Sandwich smartphone to their arsenal.

As you probably already know the LTE model will far exceed the speeds offered by the HSPA+ models, the image below shows this in detail, but what perhaps impressed us the most was the fact that the Google devs had been working hard on a feature which should help people avoid data overage charges.

When using Ice Cream Sandwich you will be able to go into Settings \ Data Usage to see exactly how much of your data cap you have used, not only this but you will be able to set a limit, investigate spikes of traffic and restrict certain applications from using background data – we have embedded a few screens below which show this particular feature in more detail. 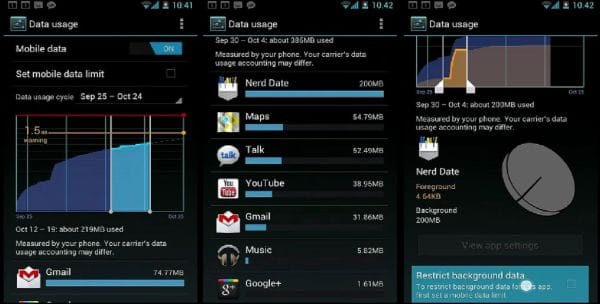 Carriers around the world will probably be annoyed about data limit feature as it will stop them from earning so much from users who go over their data threshold, but we like the way consumers will be able to see just how much data some apps use in the background and truly customize settings to suit their needs.

One thing which interested us was the fact that a Samsung representative stated that the HSPA+ model will be just 8.94mm thick (no mention of LTE), this suggests two things: firstly the LTE model will probably be thicker, secondly it could also mean that there are some design issues with the LTE model at the moment, so Samsung does not want to say how thick this variant is just-in-case (perhaps battery related?).

Keep checking the site for more Galaxy Nexus and Ice Cream Sandwich info, we will do our best to keep you posted with all of the juicy details.