In light of all the doom and gloom surrounding the US release of the highly anticipated Galaxy Nexus smartphone, we do have some pleasing news to share you now. It has been reported that the Galaxy Nexus may have better battery life than initially thought, after various tests were conducted on the device.

For those of you who were expecting no more than 5 hours of heavy usage on your Galaxy Nexus per day, prepare to be pleasantly surprised. By heavy usage, we’re talking about contsant 4G LTE data use, playing games, listening to music and so on.

A screenshot obtained by Droid-Life has revealed that the Galaxy Nexus actually has very good battery life, as the image shows that after more than 5 hours of heavy usage, the device still has 45% left in the tank for further usage, probably bringing battery life close to the 9-10 hour mark. Imagine 10 hours on the state of the art Android handset running on a 4.65-inch HD screen with 4G LTE, that is pretty impressive from where we are standing.

Of course, this has yet to be verified as the true test will come once the handset is out and multiple benchmarks can give a clearer picture of this. What it does give us now though, is the assurance that consumers will probably not need to head out and buy a secondary battery in fear of poor battery life on 4G LTE that has plagued Verizon’s other handsets.

Most Verizon customers will take 9-10 hours of heavy usage any day, and to think that they may be able to achieve this on a Galaxy Nexus is very rewarding indeed. If this turns out to be legit, don’t be surprised if this factor alone becomes a major selling point for Big Red, aside from the fact that it’s running Ice Cream Sandwich.

How impressed would you be if the Galaxy Nexus could handle 9-10 of heavy usage? 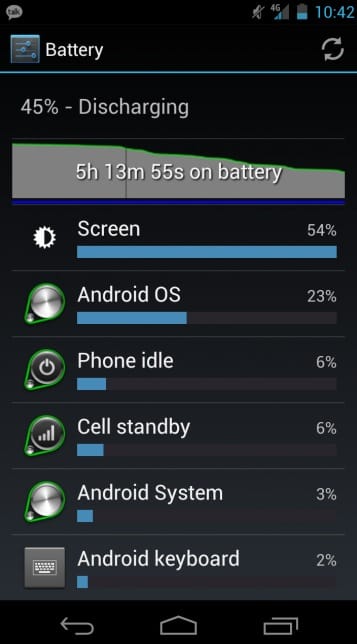