If you are pulling your hair out right now over the ongoing frustration surrounding the 4G LTE Galaxy Nexus release on Verizon, we have just a pinch of positive news to bring you now in the form of an unboxing picture gallery, giving you an exact idea of what will be included in the box when Verizon finally decide to release the device.

We previously hinted to you earlier this week that the retail box would be a surprise plain white packaging to signify a ‘pure Google’ (arguable) experience, and now further unboxing images that we have to show you confirm this.

You may have seen plenty of unboxing videos for the GSM version of the Galaxy Nexus since Europe received the device almost a month ago, but Verizon users are still waiting for the device, with the latest reports even suggesting that the device could even be delayed further beyond a supposed launch date of December 9th.

Anyway, as for the pictures we have Droid-Life to thank as they have managed to get hold of the device early and have uploaded a few images showing that Verizon 4G LTE packaging. We see a high quality image of the white Galaxy Nexus box from the outside, and then further pictures showing the red design inside, which underneath we presume reveals the user manual and various cables that come along with the device.

On a side note, two more images provided gives another confirmation that the 4G LTE Galaxy Nexus will still come pre-loaded with a few Verizon apps – these being Verizon Backup Assistant and My Verizon Mobile. Check out all of the images if you’re interested and let us know what you think of the ongoing release adventure.

Have you decided enough is enough and will be picking up a different phone on Verizon such as the HTC Rezound or Droid 4, or will you stick it out in the hope that the Galaxy Nexus is unleashed before Christmas lands, as we are getting dangerously close now to December 25 and we’d hate to think that Verizon would struggle to ship all handsets to consumers before this date if they announce it within the next few days for example. 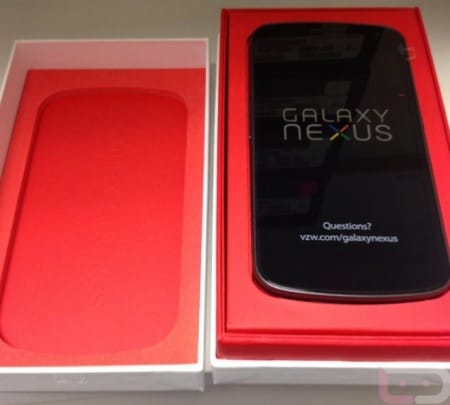