We have some good news for those of you who have been keeping an eye on Gaikai, the other cloud-based gaming alternative to OnLive, as we have a hands-on video preview of the service, which has just entered into a closed beta phase.

The hands-on video comes to you courtesy of Engadget, who managed to spent some decent time on Gaikai, sampling a demo of popular shooter Mass Effect 2, as well as quizzing Gaikai chief Dave Perry on the key benefits on the service.

To put it in a nutshell, Gaikai will be free to gamers, and instead of offering full games for a fee, Gaikai will provide an advertisement of a selected game, which will then offer gamers the chance to play a demo of it – depending on your internet connection.

Engadget used an ‘up-to’ 18 megabit AT&T U-Verse internet connection to test the service, and they claim that they were able to produce 10-15 megabits of download bandwidth, and a latency of between 25 and 35 milliseconds when playing Mass Effect 2. As for resolution, they state that they managed to hit close to 720p, which is pretty impressive, especially if you are trying Gaikai out on a low-spec computer. 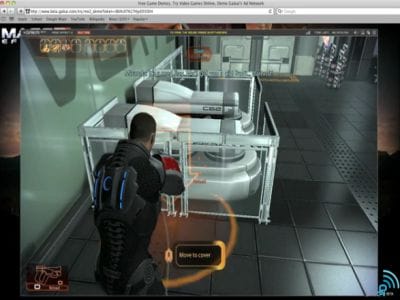 They do pick up on moments of lag and mouse precision not being perfect, but overall it looks like they were satisfied with what Gaikai brings to the table. The whole idea here is to offer gamers the chance to play demos straight away before they buy it, on any computer without having to spend the time downloading files, since the games will be hosted via Gaikai’s servers.

Check out the video demo below and let us know your initial impressions of Gaikai. Is this something you would like to try out? The service is due for a public release sometime this month.