Earlier today we told you about the new Gaems G155 portable gaming station. It may have a strange name but looks a great piece of kit, and will give Xbox 360 and PS3 owners a great way to enjoy their consoles while not at home. The new PlayStation handheld is set to be released at the end of the year, but comparing the Gaems G155 vs. PS Vita, how small would you go for PS3 graphics?

The upcoming Gaems G155 will provide owners of the slim PlayStation 3 with a 15.5-inch 720p LED display, while the PlayStation Vita is promising PS3 type graphics on an 5-inch display. So of the two devices which would you prefer? Obviously the PS Vita is truly portable, while using the G155 requires a power socket.

What we know of the Vita so far is that it will be powered by an ARM Cortex four core processor. It has an OLED multi touch screen, and front and rear cameras. Just like the G155 the Vita has built in stereo speakers, while the Vita also has built-in GPS and microphone. It also has Wi-Fi and 3G connectivity.

The Gaems G155 is described as a ‘self contained gaming environment’, and lets you to hook up your PS3 and you are good to go. It comes with accessory bags for your controllers and other gaming accessories, HDMI lead and power adapter. It costs $299 while the PS Vita is believed to start at $249 for the Wi-Fi only model.

So there is not much difference in price, but the Gaems G155 allows you to use the games and equipment you already have, it’s just not quite as portable as the Vita. 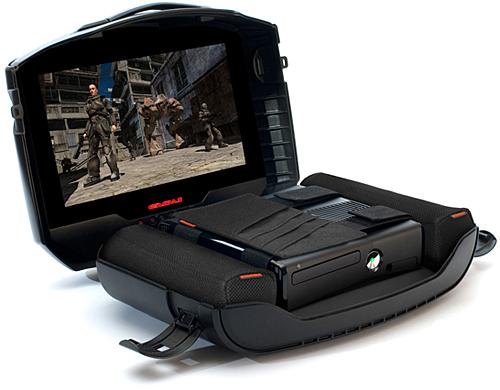