The January Winter upgrades for FIFA 17 are coming out very soon, with EA set to unload batches of transfers into the game along with big upgrades for the highest performing players.

One player however that is missing from the database altogether is new Manchester City signing Gabriel Jesus. We can see that many players are asking when Gabriel Jesus will be on FIFA 17 Ultimate Jesus but actually what you may not know is that the player is already on FIFA 17 career mode.

Gabriel Jesus rating on FIFA 17 is a 78 rare gold card which features a very impressive 86 for Pace and 85 for Dribble – take a look at the image below with the other key stats.

As you can see below, shooting is the weakness but on Career Mode he has a monster potential rating of 90 which is incredible. 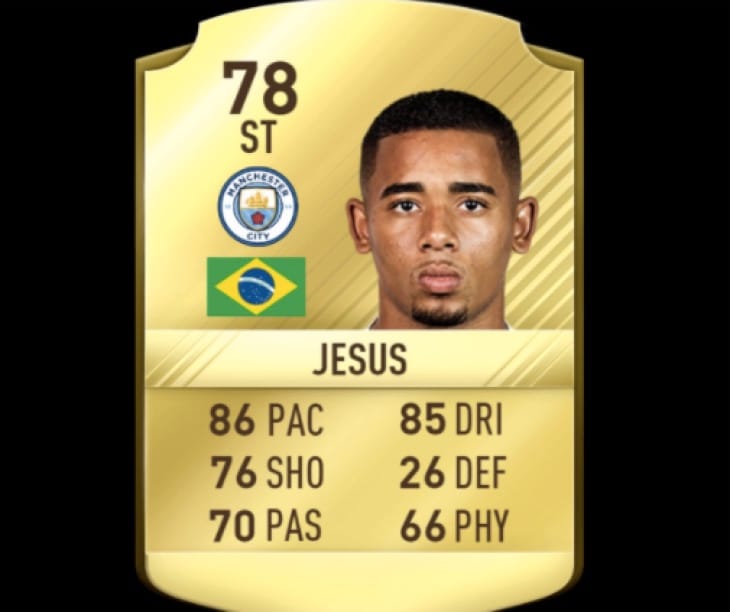 [graphic below courtesy of Freshfx]

If he features for Manchester City, fans will be demanding that EA offer a Gabriel Jesus FIFA 17 upgrade above 80 with better shooting stats. Don’t forget though one in-form card will also sort this problem out so EA just need to release the card.

Jesus played in the recent Man City Vs Tottenham game so there are no excuses for EA not to put this card into Ultimate Team as soon as possible.

We predict that it could happen as soon as next week or if not with the rest of the January transfers. Is 78 fair for Gabriel Jesus or should it be higher?