We can see that one player that isn’t in FIFA 17 Ultimate Team but is hidden away in Career Mode is Gabriel Barbosa Almeida, or Gabigol as he’s more commonly known.

As a result, many players are asking why Gabigol is not in FIFA 17 Ultimate Team but hopefully there will be a chance for EA to add him mid-season with a FUT 17 Gabigol update considering he’s now at a major European club with Inter.

In the meantime, we think you’ll appreciate taking a look at Gabigol’s rating in FIFA 17 so if he does come these are the stats he’ll have – courtesy of SOFIFA. 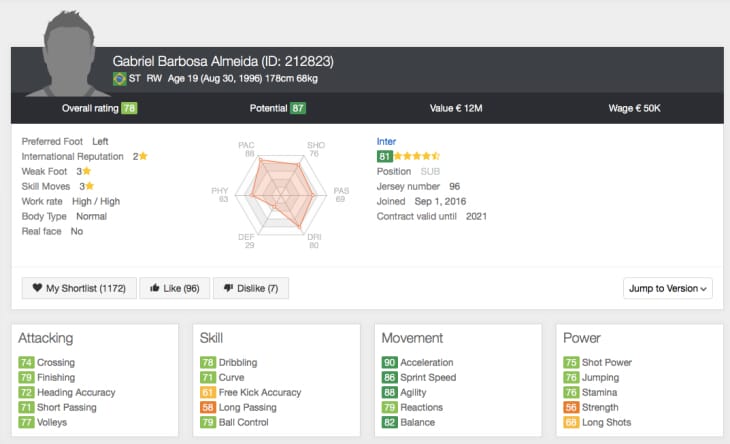 As you can see the player is rated 78 and has some very nice stats including 90 Acceleration, 79 Finishing, 86 Sprint Speed and 83 for Penalties.

Is this a player you want to see added to FIFA 17? We know that EA added new players into the FUT 16 database mid-season, so this can definitely happen if you shout loud enough.

Which other FIFA 17 players are missing that need to be added?