The Tesla Model S is considered to be one of the most-important cars at the moment because of what it represents, although the vehicle does have its haters. We’ve seen throughout history that people do not like change and the Model S is certainly shaking things up a little.

We know the Model S has had its issues, which seems to be highlighted even more by those who are not in favor of the vehicle. What makes us laugh is how they seem to forget the teething problems that cars had in the early days.

It’s clear that we are a fan of the Tesla Model S, but we are having a hard time warming to what a future model could look like. Rinspeed has shown us their vision of what a future Model S should look like and we have to say, it’s far different to the current model. 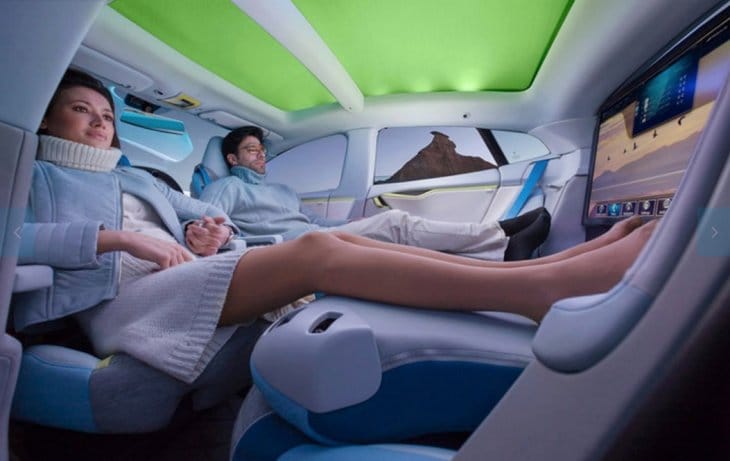 Some of you will say that the Model S is what most vehicles will be like in the near future, and with autonomous vehicles set to be the next big thing it seemed like the obvious choice to offer a vision of what an autonomous Tesla Model S would be like.

The interior of the Model S is already a nice and relaxing environment to be in, but nothing on the scale of what Rinspeed has planned. The entertainment in this vehicle takes things to another level, although this has brought a lot of criticism.

Everything seems so over the top from a 32-inch 4k monitor, 20 settings for the seats, and even a built-in espresso machine.

The thing is self-driving cars should not be all about luxury because you are still in a vehicle after all. What happens if your seat is reclined and you crash? We know some of you will say it will be impossible to crash because it is an autonomous vehicle, but we all know what happens with computers.

Rinspeed’s vision of a future Model S would only be viable once all vehicles on the road are autonomous, only then can we expect that level of comfort and entertainment.

The Rinspeed XchangE as this is called will be at the Geneva Motor Show next month.