We have a quick heads-up to all Future Fight players now who are wondering why Marvel Future Fight is down on October 14 for maintenance.

This maintenance is unscheduled, but certainly needed right now since the Alliance Battle remains closed for business after several players took the opportunity to exploit some bugs and thus granted them extra points in the rankings.

Usually, players are only able to enter Alliance Battle once per day and after that, additional entries would require some crystal payment. 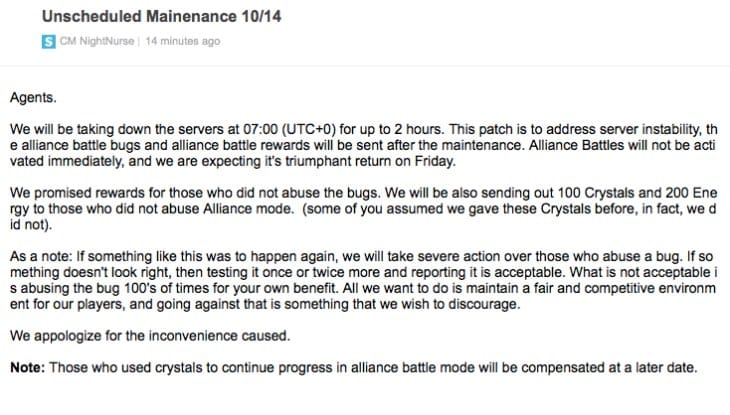 However, a bug allowed players to repeatedly enter Alliance Battle without restriction causing the ranking system to be polluted. As a result, Netmarble has shut down the entire mode for the best part of a week – promising to fix the issue soon.

More importantly though, 100 free crystals and 200 free energy is being handed out to all players who ‘didn’t abuse the exploit’.

We’re guessing Netmarble has a way to track individual Alliance Battle count, so if you were one who entered multiple times you may not get the rewards.

Future Fight maintenance today should last a total of two hours, so let us know if you can connect right now or if the maintenance lasts longer than it should.

Do you think that the rewards and punishment is fair?