If you still haven’t picked up an Xbox One console and were waiting for another price cut, Microsoft has some good news for you. We can see that new Xbox One price cuts in UK are now in effect, bringing the console down to under £300.

Remember, the Xbox One originially launched at £429 (with Kinect) before recently being reduced to £329 towards the end of last year. Now, Microsoft has slashed the retail price to £299 and we can see that some retailers are even offering lower than this to get your money.

Amazon UK for example are offering the console for £285.95, with their deal coming with £10 off the price of a new Xbox One game.

There’s other deals flying around at the moment though from different retailers. GAME are offering a console with Forza 5 for £299, while GameStop UK are offering a great price for the console at just £279.97 – the lowest we’ve seen so far. 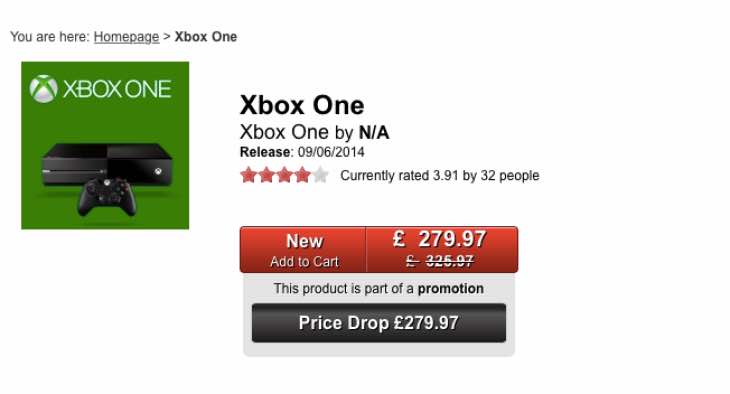 Meanwhile, Sony are yet to drop the price of the console in the UK. It remains at £329 officially, although GameStop UK are offering the Glacier White console for £289 now whilst stocks last – a great price.

The question is, will Sony be any feeling pressure after seeing Microsoft introduce all of these price cuts for the Xbox One? Or do they see it as a victory considering that their price remains the same since launch, but continues to sell well?

Let us know your thoughts on the new Xbox One price shift and if you are tempted to buy. For those that have a PS4 at the moment, are any of you planning to move over to Xbox One at this new price or not?