A fun water sports game with great graphics has recently been released. Water Sports 1.0 is available worldwide for owners of the iPhone, iPod Touch, and iPad.

Released by Blackleaf Software LLC, the app allows users to create their own characters to use as they water ski across a lake. Players tackle the lake using a choice of double ski, kneeboard, and wakeboard while they collect valuable rings for points. The game has fifteen levels of difficulty, while some items and the slalom course need to be unlocked.

There are a host of cool tricks, tips, and toys for players as well as rewards for high scores. Game play is done using the apps accelerometer, but players will have to be careful not to tilt too hard or they will end up in the lake. Thirty two achievements will keep users playing the game for a long time. Check the video out below to see the game in action. 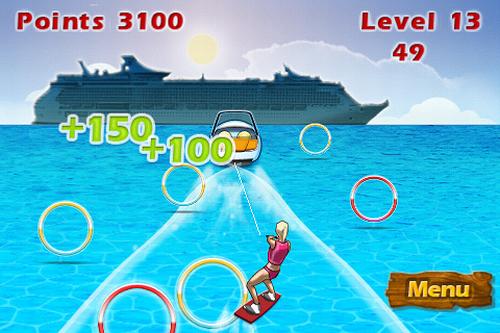 Water Sports 1.0 is available on the App Store for the introductory price of only $0.99. iOS 3.0 or later required.